Unrest on campuses – a conspiracy ? 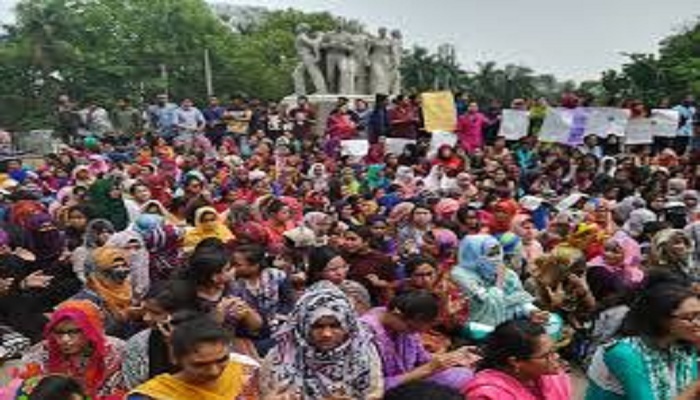 What really happened in Bangladesh’s premier Dhaka University to trigger incidents that can lead to unrest? Experts believe that a vested quarter is trying to heat up campuses to embarrass the government.

The quarter, the security and academic experts alleged has targeted the Dhaka University (DU) as the epicenter to carry out their plan as has been seen in the past.

Various local and foreign agents are involved in a deep-rooted conspiracy to hamper academic activities in the educational institutions and gain political benefit, they said.

DU is famed for being a part of major national campaigns from the 1952 Bengali language movement to the 1971 Liberation War.

Nurul Haque Nur, who holds the important post of vice president of the DU Central Students Union (DUCSU), is in the centre of recent clashes is suspected to be used as a pawn by the vested quarter. He led a violent campaign in DU and other parts of the country last year.

Some recent development in Dhaka University suggests that the conspirators have taken a fresh move to create campus movement.

DUCSU VP Nur and 27 others were injured in an attack recently allegedly carried out by activists of the Bangladesh Chhatra League and Muktijuddha Mancha on December 27. Chatra League is the student wing of the ruling Awami League.

In a counter claim, BCL and Muktijuddha Mancha leaders are saying that Nur along with his armed associates along with outsiders tried to attack and murder them. Few Mancha men have been detained by police who are probing the incident.

BNP often hypes to wage movement demanding release of party chef Khaleda Zia and realizing other demands, but the party fails to do so, he said.

Now, BNP and other local and foreign agents are trying to fuel any issue to put the government in awkward situation, he opined.

Prof Dr Harun-Ur-Rashid Askari, Vice-Chancellor of Islamic University, said some vested quarters are trying to destabilize the campus and fish in the dirty water.

VP Nur incident calls for serious and through investigation to identify the real sources of the crisis, he stressed.

Last year, a section of students led by Nurul Haq Nur started a campaign demanding cancellation of quota system in the government services. The agitation spread to other universities, colleges and even schools under explicit and implicit instigation.

General students were influenced to participate in the agitation. On April 9 last year, the agitators entered the VC’s residence breaking its main gate and ransacked several rooms and furniture. The VC and his family members narrowly escaped the attack.

The attackers also set fire to two vehicles parked inside the VC’s residence.

Although Prime Minister Sheikh Hasina announced cancellation of the quota system, the agitators did not stop.

Finally, the agitators had no choice but to end the agitation as the government issued gazette notification scrapping job quota.

In March and May, the conspirators tried to fuel campus unrest and destabilize the country centering a movement in Bangabandhu Sheikh Mujibur Rahman Science and Technology University (BSMRSTU).

Earlier, it tried to shut BSMRSTU by instigating student demonstration demanding resignation of the then vice-chancellor.

Although the VC Khondoker Md Nasiruddin was facing allegation of corruption, the student protest excelled reasonable limit due to instigation by conspirators.

The demonstration of BSMRSTU was not confined to that campus. Students of other universities expressed solidarity to the agitation of Gopalganj. Various anti-government elements at home and abroad are involved in the conspiracy to trigger campus unrest.

The government took prompt step to bring the situation under control.

The conspirators then tried to trigger campus violence after killing of Bangladesh University of Engineering and Technology (Buet) student Abrar Farhad. It was not a mere killing incident. It was aimed at putting the government in a critical situation. Although ruling party’s student wing BCL members are involved in the killing. But some of them joined BCL of Buet unit a few months before such killing and they were reportedly undercover agents of anti-liberation party Jamaat, which is a political ally of opposition BNP.

As the government took effective step, the campus movement could continue.

Jahangirnagar University was also targeted by the conspirators. Some BCL leaders and university’s vice-chancellor Farzana Islam were at loggerhead. Two top leaders of BCL were removed from the post following allegation of the VC. Later, BCL activists and general students started demonstration in the campus demanding resignation of Farzana Islam for her alleged corruption and abuse of power. The protesters reportedly submitted some documents to the government authorities as to the evidence of her corruption. The agitation still continues.

So, the political opponents and foreign agents are instigating unrest in various sensitive sectors to destabilize the government and country.