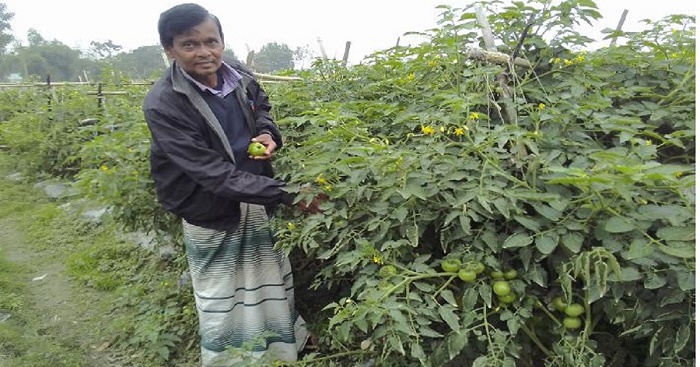 Mohiuddin Miah of Mohammadpur village at Ramrail union in Sadar upazila is one of those youths. Vegetable produced by him are now supplied to various markets in the district and adjoining areas.

Mohiuddin and his friend Jamal Miah started cultivating vegetables together in 2008 on a five-bigha plot. In the beginning, Mohiuddin took Tk 30,000 loan from a local cooperative and Jamal provided Tk 50,000. With this amount of Tk 80,000 capital, they launched their joint venture project.

They bagged good profit in the first year. Inspired by the success, they took on lease more croplands from others to cultivate vegetable. They used organic and earthworm fertiliser.

After several years, Mohiuddin parted ways and cultivated vegetables on 25 bighas this year.

MA Sahel, a resident of Mohammadpur village, said their success has encouraged many other youths of the village.

Mohiuddin said his yearly profit is around Tk 6-7 lakh.

“Vegetables grown in my farm have big demand in the market. Wholesale traders from various places come to me,” he said. “Around 12 youths have started vegetable cultivation after being encouraged from my success.”

Sadar upazila Agriculture Officer Munshi Tofayel Hossain and Deputy Assistant Agriculture Officer Habibur Rahman Khan said they monitor Mohiuddin’s land on regular basis. If he can manage loan from bank with low interest, he will be able to expand his business.

Munshi Tofayel Hossain also said farmers in this upazila have cultivated vegetables on 650 hectares. Farmers are being benefitted from the cultivation.

Mohiuddin said: “I was unemployed once. But now I’m self-employed. If the unemployed youths start cultivating vegetables after receiving training from government agencies instead of running after job or going abroad, then the unemployment problem will be reduced.”