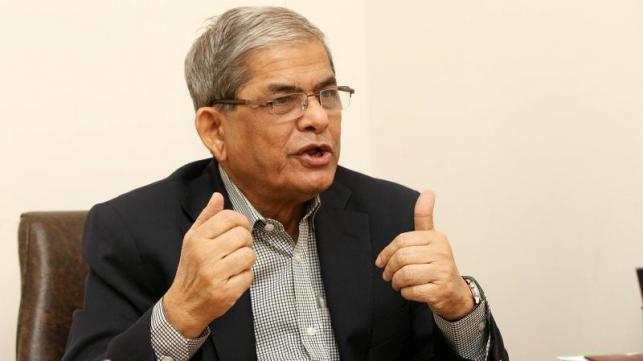 BNP Secretary General Mirza Fakhrul Islam Alamgir on Wednesday said the use of electronic voting machines (EVMs) in the upcoming elections to Dhaka south and north city corporations will not help reflect the mandate of the electorate.

“We’ve clearly said no election can be held fairly under this Election Commission and the government, and people’s mandate won’t be reflected in the polls. Even then we’re participating in the city polls as we believe in democracy,” he said.

Fakhrul came up with the remarks while talking to reporters after placing wreaths at the grave of BNP founder Ziaur Rahman together with the newly-elected committee members of Jatiyatabadi Chhatra Dal.

The BNP leader further said, “They (EC) have said the elections will be held using the EVMs, though it’s completely a faulty system. We turn down it as we think people’s verdict won’t be reflected if the EVMs are used.”

He also said there is little chance to ensure credible elections to the two city corporations.

The elections to Dhaka South and North city corporations will be held on January 30 next, according to a schedule announced by Chief Election Commissioner KM Nurul Huda on Sunday.

The entire elections will be held using electronic voting machines (EVMs) instead of traditional ballot papers, the CEC said.

Fakhrul hoped that BNP Chairperson Khaleda Zia will be freed from jail through a strong movement in the New Year. “Chhatra Dal took a vow today that they’ll restore democracy and ensure the release of our chairperson through a strong struggle and creating a unity of students and people. “

The BNP leader hoped that the year 2020 will be a good year for the country’s people with the ‘restoration’ of democracy and people’s rights.  “It’ll be a beautiful year for people. We’ll establish truth by defeating falsehood in this year.”

He greeted the members of the Christian community on the occasion of Christmas. “We expect a beautiful and peaceful environment to be created with the spirit of the Christmas.”