Delights of Celebrating Christmas in Bangladesh 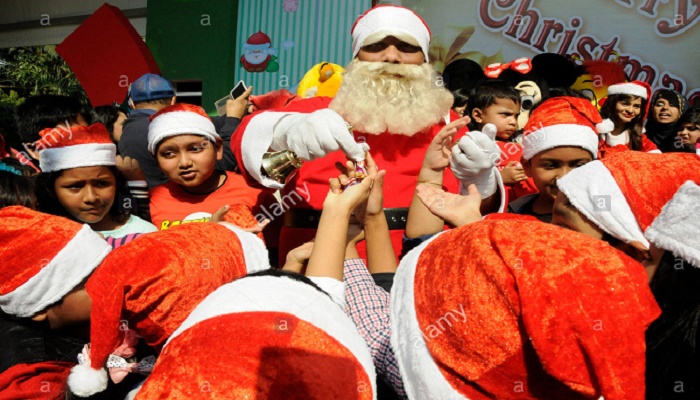 The holiday season for the Christian community is finally here which means it's time for all things red, green, merry, and bright. And while we obviously adore Christmas, it can sometimes be all too easy to get lost in the hustle and bustle of the holiday preparations. Because before Santa slips down the chimney, the Christian community got cookies to bake, a tree to decorate, and so many gifts to buy. It's no wonder that by the time the big day finally arrives, all you want to do is kick back with a glass of eggnog and a bucket of Christmas candies.

But wait! Christmas is about so much more than festive decor and gifts under the tree, it’s about celebrating family, friends, and everything else that brings you joy.

Merry Christmas! It’s the most wonderful time of year with sparkling snowflakes and twinkling lights, happy carols and rosy cheeks, good cheer and warm fuzzy feelings. The holiday’s sweetest moments look slightly different for all of us, but no matter your traditions, one thing never changes: the love that surrounds us and the joy that fills our hearts.

A good conscience is a continual Christmas. It is an annual festival commemorating the birth of Jesus Christ, observed primarily on December 25, a religious and cultural celebration among billions of people around the world. A feast central to the Christian liturgical year, it is preceded by the season of Advent or the Nativity Fast and initiates the season of Christmastide, which historically in the West lasts twelve days and culminates on Twelfth Night; in some traditions, Christmastide includes an octave. Christmas Day is a public holiday in many of the world's nations including Bangladesh is celebrated religiously by a majority of Christians, as well as culturally by many non-Christians, and forms an integral part of the holiday season centred on it.

The traditional Christmas narrative, the Nativity of Jesus, delineated in the New Testament says that Jesus was born in Bethlehem, in accordance with messianic prophecies. When Joseph and Mary arrived in the city, the inn had no room and so they were offered a stable where the Christ Child was soon born, with angels proclaiming this news to shepherds who then further disseminated the information.

Although the month and date of Jesus' birth are unknown, the church in the early fourth century fixed the date as December 25. This corresponds to the date of the solstice on the Roman calendar. Most Christians celebrate on December 25 in the Gregorian calendar, which has been adopted almost universally in the civil calendars used in countries throughout the world. However, some Eastern Christian Churches celebrate Christmas on December 25 of the older Julian calendar, which currently corresponds to a January date in the Gregorian calendar. For Christians, believing that God came into the world in the form of man to atone for the sins of humanity, rather than knowing Jesus' exact birth date, is considered to be the primary purpose in celebrating Christmas.

The celebratory customs associated in various countries with Christmas have a mix of pre-Christian, Christian, and secular themes and origins. Popular modern customs of the holiday include gift giving, completing an Advent calendar or Advent wreath, Christmas music and carolling, lighting a Christingle, viewing a Nativity play, an exchange of Christmas cards, church services, a special meal, pulling Christmas crackers and the display of various Christmas decorations, including Christmas trees, Christmas lights, nativity scenes, garlands, wreaths, mistletoe, and holly. In addition, several closely related and often interchangeable figures, known as Santa Claus, Father Christmas, Saint Nicholas, and Christkind, are associated with bringing gifts to children during the Christmas season and have their own body of traditions and lore. Because gift-giving and many other aspects of the Christmas festival involve heightened economic activity, the holiday has become a significant event and a key sales period for retailers and businesses. The economic impact of Christmas has grown steadily over the past few centuries in many regions of the world.

Christmas in Bangladesh falls in the winter season. Of course Christmas in our country has great spiritual meaning and is not as commercialised as in the developed countries of Europe or Northern America – this is probably a reason why in every country there are so many interesting local traditions and cultural differences. As in the most Christian cultures in Europe and the Americas, having Christmas dinner with friends and relatives is the most popular activity after attending the church. Christmas is usually an official public holiday in our country, so people use the opportunity to spend time with their friends and family.

After church service, Christian people go home and have a festive meal along with their friends, near and dear ones. Children do usually get Christmas presents. The festivities are accompanied by singing the Christmas Carols. In our country, there is singing and dancing just as in many other countries of the world. One of the most widespread Christmas traditions in Bangladesh is the colourful decorating of premises which symbolises peace. There is Santa Claus in our country. The sunny weather draws many people to the outdoors. Later in the evening a masquerade party is held with lots of food and music for residents to enjoy.

On the day of this occasion, the sun shines and everything seems so alive. All that vitality is brought to life even more by the festivity of Christmas. Just like any other place in the world, the preparations for the celebration of Christmas begin way in advance. Some Christian businesses are closed for the whole month of December. Even though Christmas in our country has many differences from Christmas in the rest of the world, the actual traditions and festive spirit are quite similar. Houses of the Christian community are well decorated. Elaborate Christmas dinner and carollers bring Christmas spirit and festivity in the wind.

Many families set up a decorated Christmas tree in a corner with lights and ornaments, surrounded by gifts for everyone at home. The Christians say the first decorated Christmas trees appeared as far back as the 14th century. Christmas trees are a popular decoration as are tiny sparkling lights in windows and on walls. However, the Christmas tree is usually only put up in the homes only in the morning of the 25th of December. For them, Christmas Day is a day of good eating, exchange of gifts to add up the enjoyment. The women wake up bright an early, ready for a busy day full of tasks, making sure everything is neat and set up before visitors appear.

On Christmas Day, children and adults, representing the angels in the fields outside the Churches, go from house to house singing carols. Church services are held on Christmas day where people dress in their native attires or Western costumes. Later on, there is a grand feast in every Christian home.  Families eat together with close friends and neighbours, and gifts are exchanged. In the evening, the children and adults do traditional dancing. The teenage kids and adults sing and play the drums. Friends and family members sing the jingle and party till midnight.

At Christmas, Christians all over the world celebrate the birth of Jesus Christ. Traditional Christmas decoration often can be admired and festive celebrations can be joined in most countries, even in many of the countries where Christianity is not the religion of the majority of people like Bangladesh. Christmas all over the world is celebrated on Christmas Day, the 25th of December. Some countries however have different Christmas traditions and Christmas traditions and celebrations take place over a longer period of time.

Christmas is a happy, festive time filled with great spiritual significance. Carolling, feasting, and gift giving along with the prayers and wishes - the Christmas is celebrated with high spirits all over the world including Bangladesh. Though the mode of celebration, the dates and the traditions vary, the main spirit remains the same everywhere. Although Christians only form a small minority of the population in Bangladesh, her long history as a British colony has seen many traditions remain. This includes keeping Christmas Day as a public holiday.

Every year, Christmas is celebrated on December 25 to commemorate the birth anniversary of Jesus Christ. This auspicious occasion is a prime festival of Christian community and hence, is celebrated zestfully around the world including Bangladesh. Christmas conveys his message of love, tolerance and brotherhood. Though, it is a religious festival of Christians, it has a special significance in everyone's life of the Christian community in Bangladesh.

The festival of Christmas reflects the cultural unity of Bangladesh as on this auspicious occasion. This cultural unity sets an excellent example of brotherhood and humanism.

Winston Churchill veritably wrote, “Christmas is a season not only of rejoicing but of reflection.” Love comes down at Christmas; love all lovely, love divine; love is revealed at Christmas; and stars and angels give the sign. We make a polite expression of our desire for welfare of the Christian community in Bangladesh and good luck to them on the auspicious occasion of Christmas.

The writer is a political observer who writes on politics, political and human-centred figures, current and international affairs