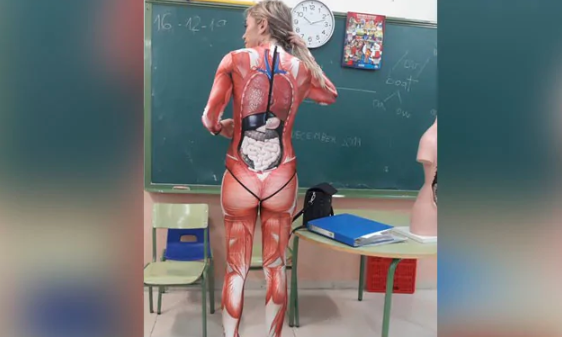 A Spanish school teacher went viral when she took a biology class wearing a bodysuit with human internal organs printed over it. According to the New York Post, Veronica Duque has a teaching experience spanning over 15 years and presently instructs 3rd graders in various subjects such as science, English, art, social studies, and Spanish.

The 43-year-old stumbled upon this strange-looking piece of wardrobe through an advertisement that appeared suddenly while she was surfing the internet.

Ms Duque was struck with the idea of using the suit to make biology fun and easy to learn for her students.

"Knowing how hard it is for kids this young to visualize the disposition of internal organs, I thought it was worth giving it a try", she told a website.

Veronica's husband accompanied his wife to the class and clicked a few pictures of her donning the anatomy chart outfit. He posted the pics on Twitter, where they have gone viral with a barrage of appreciative comments, over 13,000 retweets and 66,000 likes.

"Very proud of this volcano of ideas that I am lucky to have as my wife. Today she explained the human body to her students in a very original way, and the kids were freaking out great Veronica!!!" wrote Mike Moratinos as the caption of the tweet.

It's not the first time Duque has resorted to such out-of-the-box ways of teaching.

She has previously taken up disguises for history lessons and used cardboard crowns to denote grammatical concepts such as nouns, adjectives, and verbs.

She hopes her approach will bring about a change in the common perception towards teachers who are usually considered boring and lazy by society. 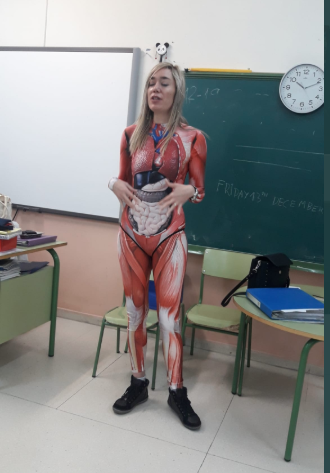