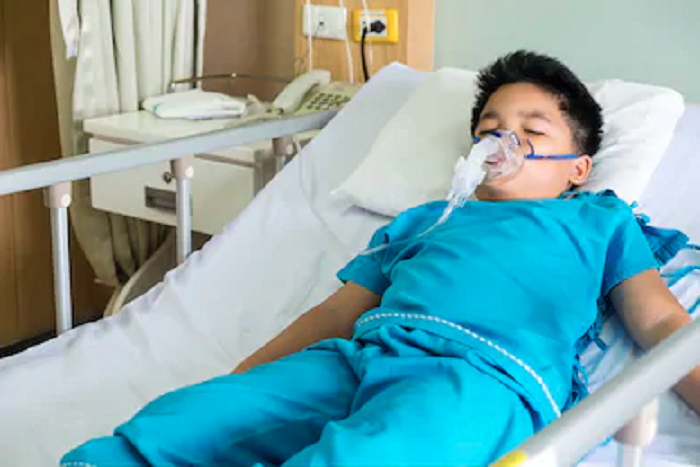 Three-year-old girl Tanisha Raihan was lying on the bed wearing an oxygen mask and her anxious mother was sitting on a corner of the bed at Munshiganj Sadar Hospital.

The baby girl was facing troubles in breathing as she had been suffering from pneumonia for the last couple of days.

“My daughter could not breathe properly. We felt that she had a huge amount of cough inside her chest. Whenever she tried to take breaths, a kind of peculiar sound was produced in her chest. Then, we rushed to the hospital,” said Quamrunnahar Begum, mother of the girl.

Not only Tanisha, but several dozens of children came to the hospital in the last one week after being infected by different cold-related disease, said Dr Mridul Kumar Das, a doctor of the hospital.

Many of them were sent back home after providing primary treatment, while many others were admitted to the hospital as their condition was not satisfactory, said the doctor.

A mild to moderate cold spell is sweeping over the country causing untold sufferings to people, especially those belonging to the low income group. But the children are double sufferer as they are highly vulnerable to different infectious diseases during the bone-chilling cold.

“We, along with three children, are living here in the open space. We don’t know whether our children would survive or not amid such cold winds. They are getting sick. But we cannot take them to hospitals for want of money,” said Johura Khatun, who lives in a tent on a footpath near Kamalapur Railway Station in the capital.

During a recent visit to Dhaka Shishu Hospital, it was seen that most of the patients, who were waiting for outdoor services, were suffering from cold-related disease.

“I have come from Gabtoli area. My four-year-old boy is suffering from prolonged coughing for the last couple of days. We are in fear whether my child is suffering from any complex disease,” said Rahman Miah, a truck driver by profession.

Some 2.5 lakh patients were admitted to different government hospitals in 64 districts across the country in last one and a half months. Most of them are children, said Dr Ayesha Akther, assistant director of Health Emergency Operation Center and Control Room of the Directorate General of Health Services (DGHS).

A total of 16 children died during this winter being infected by different cold-related disease. Most of the victims, who died, were suffering from asthma and breathing complications, she informed.

Many parents have taken extra cautionary measure to keep their children safe during the cold spell.

“We don’t allow our child to come in touch with cold water. We always provide warm water whenever she needs to wash hands or use toilets,” said Shuvo Rahman, a government employee, who has a three-year girl.

Rabiul Islam, a grocery shop owner at Hatirpool area in the capital, said his five-year-old son Imshiat Hossain used to play on the floor in barefoot. He neither wore socks nor sandals. But he forced his boy to wear socks, shoes and warm clothes since the cold spell started.

Contacted, Dhaka Shishu Hospital’s director Prof Syed Shafi Ahmed said children should be given extra care to safeguard them from being infected by cold-related diseases.

“Children should be barred from consuming ice-cream, cold-dinks and similar types of food. During the cold spell, children should be wrapped up with warm cloths whenever they are brought outside home. If necessary, guardians should talk to doctors as part of cautionary measures,” he suggested.