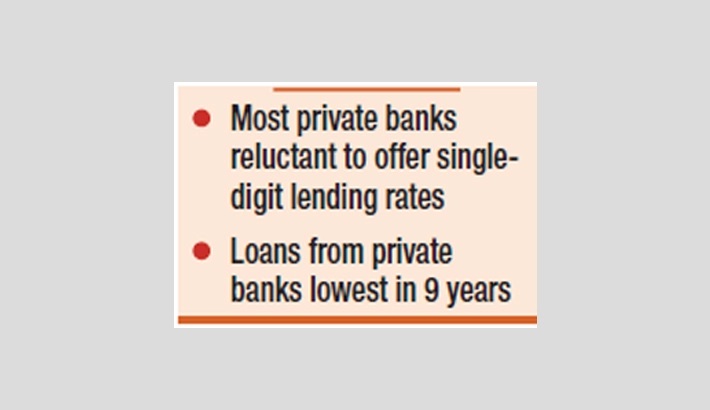 Despite receiving many facilities from the government in the last one and a half years in the name of introducing single-digit interest rates, most private banks are yet to deliver on the promise.

Private banks are now urging the government to fully execute its commitment to keep 50 per cent of its total deposits at private banks to tackle liquidity crisis and help them offer single-digit interest rates for industrial loans and working capital loans.

Half of the committed deposits are yet to be transferred to the private commercials banks, they argued.

“The private banks have collected deposits at higher interest rates—- after adding operational expense and inflation, the cost of fund exceeded 10 per cent. The banks will face huge losses if they now offer single-digit interest for lending,” the chief executive of a private bank told the Daily Sun on Wednesday.

Meanwhile, loan disbursement from the private banks reached a nine-year low in October this year.

Bankers said many good borrowers have now stopped paying their loan instalments due to relaxed rescheduling rules. Many clients are also rushing to the state-owned banks to enjoy comparatively lower interest rates.

Some experts, however, said the interest rates should be allowed to take their own course. The pressure is causing a drop in loan distribution. Analysts said if the banks get deposits at lower interest rates, they will automatically provide loans at low-interest rates.

That is how interest rates in 2017 were reduced to a single digit. The banks have to devise a strategy to reduce default loans and as well as to control interest rates. The attempt to forcefully cut down interest rates had led to a fall in loans, which is harming the economy, they added.

Syed Mahbubur Rahman, chairman of the Association of Bankers Bangladesh (ABB), said many banks are now extra cautious in providing loans after the announcement to reduce the interest rate to a single digit.

“Loan growth has decreased. At the same time, deposits are insufficient. Then again, many borrowers have stopped paying the loan instalments to avail certain facilities,” he said.

Meanwhile, though 50 per cent of government deposits are supposed to come to the private banks, they have not received even half of the deposits. All these factors have put the banking sector under pressure, Syed Mahbubur Rahman noted.

Under pressure from the private banks, the government made several changes in the Bank Company Act in 2018, allowing four members of the same family to be on the board of a bank for a stretch of nine years.

Supernumerary Professor of the Bangladesh Institute of Bank Management (BIBM) Helal Ahmed Chowdhury told the Daily Sun that it will take time for the private banks to reduce the lending rates to 9 per cent.

“The banks determine interest rates on the basis of their fund expenditure. That is why many have adopted a cautious stance on loans, which does not bode well for the economy,” he added.