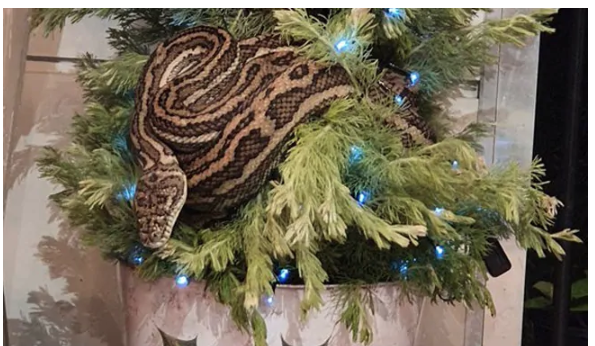 "We came home from work and there's a couple of butcher birds that visit every day and they were just kicking off on the balcony, going crazy," Ms Chapman, who has lived in Australia for seven years, said.

Her partner, John Brooks, went out to take a video of the birds. As he leaned against the Christmas tree while taking the video, he discovered the cause for their bizarre behaviour.

"As he's turned around and stepped back, he didn't realise he was leaning on the Christmas tree with the snake wrapped around it," Ms Chapman said to 7 News.

"It was a bit of a shock to begin with."

Pics of the python were shared on Twitter by John Brooks. They show the huge snake wrapped around the small tree.