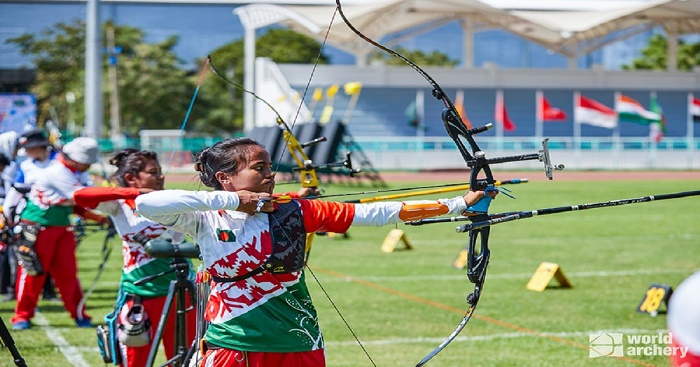 The new year 2020 will kick off within two weeks but Bangladesh archery has already entered into a new era as 16 archers created history by clinching all the ten gold medals in all ten events of archery discipline of the 13th South Asian Games held in Nepal from December 1 to 10.

Bangladesh finished 5th out of 7 participating countries in the games. During the 10-days, 462 Bangladeshi athletes bagged 142 medals including 19 gold, 33 silver and 90 bronze in 25 disciplines of sports. That means, 446 athletes secured 9 gold, out of 19 gold.

Bangladesh are only ahead of sixth-placed Maldives and bottom-placed Bhutan. Maldives earned 5 medals including one gold and Bhutan achieved 20 medals (no gold).

Despite having the frustrating stats, Bangladeshi athletes set a new record of 19 gold in an edition since the games was introduced in 1984 also in Nepal.

The previous best performance of Bangladesh in the SA Games was 18 gold medals earned in 2010 in Dhaka while their highest number of gold medals won in a single game held in abroad was 7, in the Madras Games in 1995.

However, there is no doubt that Bangladeshi archer have gave their outstanding performances in the recent concluded regional meet. The archers touched a new milestone of claiming all-10-gold in all 10 events (singles and teams) of archery after India bagged all-10-gold in all 10 events of archery discipline in the 12th SA Games in Guwahati. It also indicates that Bangladesh’s uprising as the new super-power of world archery.

Shana, Eti and Sohel were the best performers of Bangladesh in the regional games after swimmer Mosharraf Hossain Khan, who secured a record five gold medals for Bangladesh in a single edition -- three in individual events and two in relay--in the 2nd SAF Games (presently SA Games) in Dhaka in 1985.

In addition, Shana is the first Bangladeshi archer who qualified for the Tokyo Olympics 2020 on merit and won Bangladesh’s first-ever bronze medal in the World Archery Championship. The 24-year-old archer from Khulna has become the second Bangladeshi athlete to qualify for the Olympics on merit after golfer Siddikur Rahman, who took part in the Rio Olympics in 2016.

It is notable that Indian archers have not taken part in the SA Games this year as the Archery Association of India (AAI) are facing international ban attributed by the apex body of world archery World Archery Federation (WAF). So, is it the main reason behind Bangladesh’s sudden success?

While asking the question, General Secretary of Bangladesh Archery Federation (BAF) Kazi Razibuddin Ahmed Chapal replied to UNB, “We were expecting at least eight medals from archery. We, the members of South Asian Archery Federation (SAAF), tried hard to lift the ban in our Bangkok meeting ahead of the games. But we failed to manage the WAF.”

“Another thing is, India mainly focus on compound archery while we have targeted recurve events. So, I don’t think India’s absence is the main reason behind our success,” Chapal, also a member of Electoral Board of WAF, added.

While asking about the next plan, Chapal said, “We are now 7th in the Asian archery after giants like South Korea, Japan, India. Our next target is now to improve our ranking and at least claim the top slot in South Asian region beating India.”