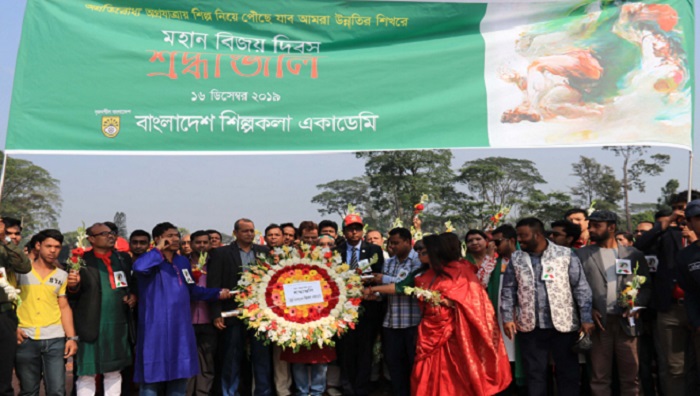 Bangla Academy started the day by placing wreaths at the National Mausoleum Savar paying homage to the martyrs of the Liberation War.

A seminar, presided over by Bangla Academy President and National Professor Dr Anisuzzaman, was arranged in the afternoon at the academy’s Nazrul Stage.

Starting at 3:45 pm through raising the national flag by DU Vice-chancellor Prof Akhtaruzzaman, the event included a cultural session with solo and group songs, poetry recitations and dance performances.

The National Academy of Fine and Performing Arts, Bangladesh Shilpakala Academy (BSA) celebrated the day with a range of colourful festivities.

BSA started the day at 8:30 am by placing a wreath at the National Mausoleum by its Director General Liaquat Ali Lucky and other staff members.

At 9:00 am, a cultural session was organised at the adjacent green valley of the memorial where 500 promising artistes took part in poetry recitations, acrobatics, musical performances and art camp.

The academy also arranged a seminar followed by a cultural session at the National Theatre Hall of BSA in the evening.