Bodies of Gazipur factory fire victims handed over to families 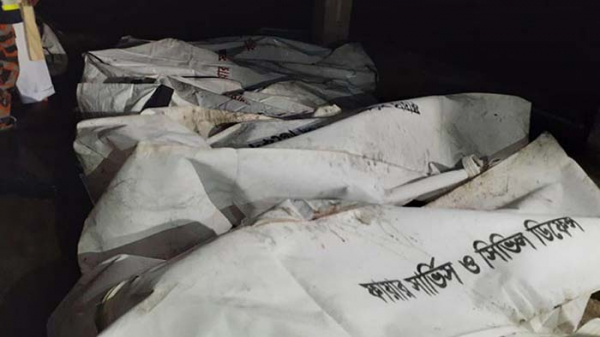 The bodies of 10 victims of the Gazipur factory fire were handed over to their families on Monday after collecting DNA samples.

Additional Deputy Commissioner Shahinur Islam, head of an investigation committee formed by the district administration, said the postmortem examinations were carried out at Shaheed Tajuddin Ahmad Medical College Hospital before they were handed over to their families.

The victims were identified as – Tariqul Islam of Mymensingh; Limon Islam and Foysal Khan of Dinajpur; Uttam Chandra Das of Sadar upazila; Shamim and Rashed from Gazipur’s Sreepur; Faridul Islam of Rangpur; Sajal Mia of Narsingdi; Pervez of Naogaon; and Yusuf Mia of Brahmanbaria.

They were killed in a fire that ripped through ‘Rouza High-tech Fan Luxury’ factory at Keshorita in Sadar upazila on Sunday evening.

A five-member committee was formed to look into the fire. It has been asked to submit its report within seven working days.