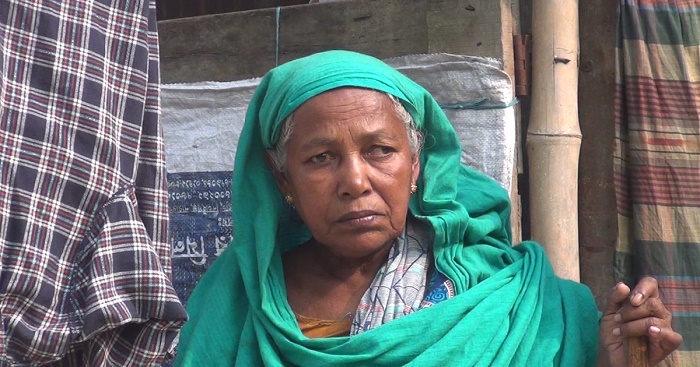 A young Shukuronnessa picked up arms to liberate the country from Pakistani occupation in 1971, but nearly five decades after the independence, her struggle to find a permanent shelter for herself and her family continues.

She has been living in a hovel on a government land beside the Kumar River in Alamganda since independence. The Water Development Board has recently served her a seven-day eviction notice.

Shukuronnessa was only 22 years old when she was victimised by the Pakistani Army for helping freedom fighters but the ordeal did not stop her from fighting for the country.

She was one of the estimated 2,00,000 women who were dishonoured during the war. Bangladesh’s Founding Father  Bangabandhu Sheikh Mujibur Rahman honoured the women as ‘Biranganas’ in 1972 and the process to rehabilitate them also started at his initiative but it was stalled after his assassination.

A number of war heroines took their own lives while many others like Shukuronnessa continued their struggle.

Shukuronnessa was also among them and has been living on the government benefits.

Monirul Islam, a resident of Alamdanga, said Shukuronnessa’s recognition came after a long struggle. The 70-year-old was living with her 10-member family on the river bank but was recently ordered to vacate the place, he said.

Shukuronnessa is at a loss. “I spent 50 years of my life on the bank of the Kumar River. I had been living here with my four children after my husband’s death,” she said.

“The hut is the only shelter we have,” she said in a soft, broken voice. “If I’m evicted, I’ll be forced to live on the streets with my family in this old age. I’m worried and can’t sleep at night.”

Chuadanga Deputy Commissioner Nazrul Islam Sarkar said the government has taken several projects for the homeless which would facilitate thousands of people.

“It's unfortunate that a woman who sacrificed her honour and fought for our flag is now struggling to find a space for living,” he said. “I’ve instructed the Upazila Nirbahi Officer to take necessary steps to resolve the matter.”