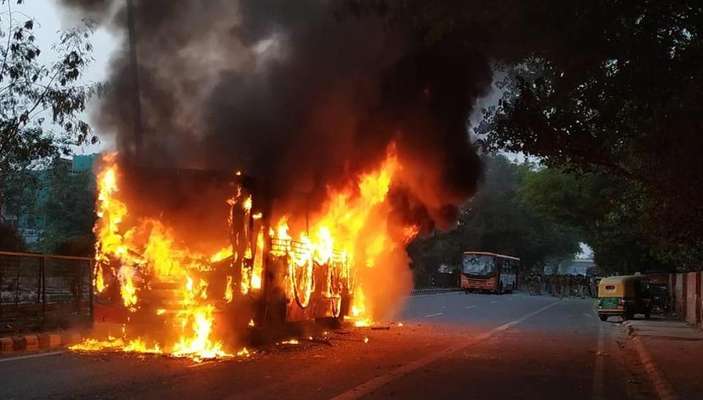 Four fire tenders were rushed to the spot near Julena Crossing where Delhi police baton-charged the demonstrators and fired tear gas to disperse those indulging in arson.

Deputy Chief Minister Manish Sisodia announced that all private and government schools in the affected areas of South-East district would remain closed on Monday on account of violence.

Delhi Traffic Police closed vehicular movement from the Okhla Underpass to Sarita Vihar. Parts of the Delhi-Mathura Road, which is opposite NFC, were also blocked. Traffic from Badarpur and Ashram Chowk areas was diverted.

Later several other metro stations in South Delhi and other areas were closed in anticipation of another protest by students at Police Headquarters in ITO.

As many as 50 students, who were detained during protests at the Jamia Millia Islamia University on Sunday, were released in the early hours of Monday, police have said.

Of the 50 students, 35 were released from the Kalkaji police station and 15 from the New Friends Colony police station, a senior police officer said.

Earlier on Sunday night, the Delhi Minority Commission (DMC) issued a direction to the SHO of Kalkaji Police Station to release the "injured" Jamia students held there or take them for treatment at a reputed hospital without any delay. The commission also directed the officer to file a compliance report by 3 pm on Monday.