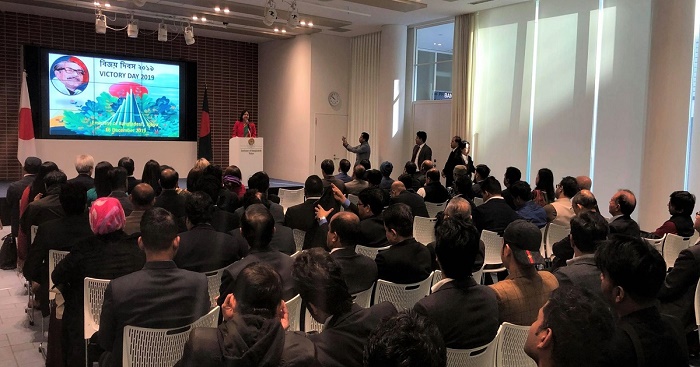 The 49th Victory Day of Bangladesh was observed in Tokyo, Japan on Monday with due respect and festivity.

Different activities were organised by the Embassy of Bangladesh. The programmes began with hoisting of the national flag with national anthem at the embassy premises in the morning.

Chargé d'affaires Dr Sahida Akter hoisted the flag while all the officials and representatives of Bangladesh community were present, the embassy said in a statement.

Later, a minute’s silence of respect was followed by special prayer in memory of martyrs who sacrificed their lives for Bangladesh’s independence.

Messages issued on the Victory Day by the Prime Minister, Foreign Minister and State Minister for Foreign Affairs were read out to the audiences respectively.

In her speech, Dr Sahida recalled and paid tribute to the Father of the Nation Bangabandhu Sheikh Mujibur Rahman and paid homage to the martyrs of the Liberation War and sacrifices made by 2,00,000 women.

She said it was the Prime Minister’s hard work and dynamic leadership that made Bangladesh a role model of development to the world. To continue development, she urged all, especially those living in Japan, to contribute more for the well-being of the nation.

Representatives from non-resident Bangladeshis participated in an open discussion on the significance of the day. Later Bangladeshi foods were offered to the guests. All officials and staff of the embassy and many Bangladeshis living in Japan were present.

The programme was conducted by First Secretary of the embassy Arif Mohammad.