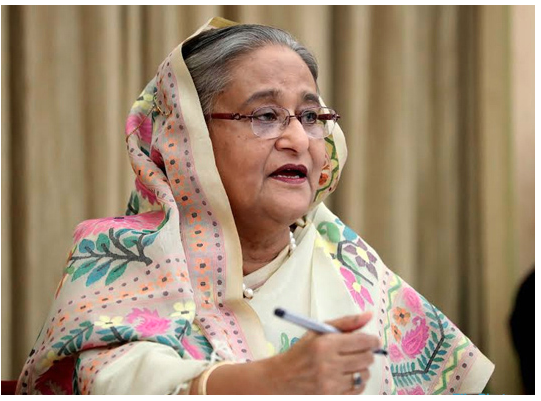 Prime Minister Sheikh Hasina accused again Ziaur Rahman of his involvement in the killing of Bangabandhu, saying that he (Zia) was the most trusted person of Khandaker Moshtaque.

“Moshtaque promoted Ziaur Rahman as the army chief as Zia was the most trusted person of Moshtaque. If Zia was not involved in the killing of Bangabandhu, why Khandaker Moshtaque made him army chief?” she said.

The prime minister said this while taking part in a discussion at Krishibid Institution, Bangladesh (KIB) Auditorium at Farmgate here this afternoon.

Sheikh Hasina, also the Awami League (AL) president, urged the new generations to advance the country further by upholding independence and stay alert so none can play ducks and drakes with the fate of the people in future.

The premier said the countrymen will have to think that on the soil of Bangladesh, the traitors like Mir Zafar and Khandaker Moshtaque were born and the people like ‘killer Zia’ has come time and again.

Bangladesh Awami League organised the discussion on the occasion of the Martyred Intellectuals Day.

At the outset of the discussion, a minute’s silence was observed as a mark of profound respect to the memories of Father of the Nation Bangabandhu Sheikh Mujibur Rahman and other martyrs of the August 15 carnage, four national leaders, martyrs of the liberation war and martyred intellectuals.