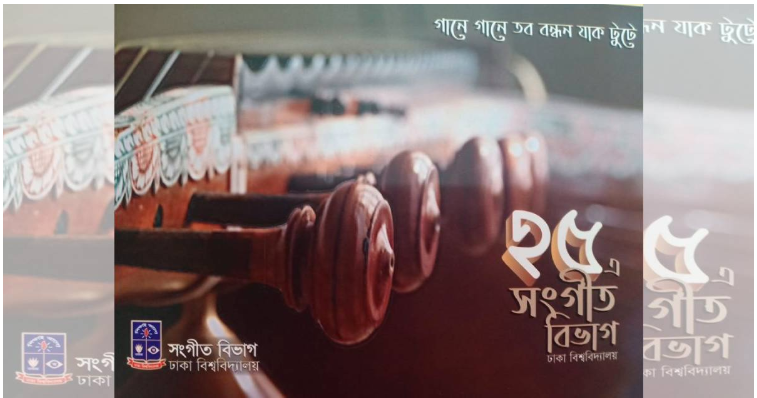 The Music Department of Dhaka University (DU) is going to arrange a two-day music festival on December 17-18 with the theme ‘Bangla Gaan’ (Bangla Songs), aiming to keep cultural activities alive and thriving in the country.

Organisers said the ‘Music Festival 2019’ will be part of the 25th anniversary celebrations of the department that started its journey in 1994.

On December 17, a colourful procession will be brought out at 10am from Arts Faculty building. Teachers of the department, its present and former students, and staff will join the procession.

DU Vice Chancellor Prof M Akhtaruzzaman will inaugurate the festival at 11am at Teachers Student Centre (TSC) while Professor Emeritus Dr Rafiqul Islam and DU Pro-VC Dr Nasreen Ahmed among others will be present as special guests.

The Silver Jubilee will be celebrated by cutting a cake, to be followed by a gathering of former and present students, and musical performances in the evening.

Housing and Public Works Minister SM Rezaul Karim will be present as the chief guest at the evening session at 5:30pm.

Commemorating Bangla songs and its creators of the period from ‘Shakta Padabali’ to present, prominent artistes from Bangladesh and India as well as teachers and students of the department will perform during the two-day festival.

Over 250 students of the department will present improvised choral songs on the first and second days of the festival.

An open discussion titled ‘Music in Institutional Education: Dreams, Possibility and Reality’ is scheduled to be held on the second day of the festival.

Experts will take part in the discussion and shed light on the situation of music in institutional education, its success, contemporary crisis and plans to overcome those issues.

On the second day of the festival, Bangladeshi celebrated artistes Ferdous Ara, Khairul Anam Shakil, Syed Abdul Hadi, Rafiqul Alam and Hasina Mumtaj along with teachers of the department will perform while two Bangladeshi bands are scheduled to perform at the programme.

Celebrated Bangladeshi Nazrul Sangeet exponent Nilufar Yasmin, also a teacher of the department till her death, will be honoured at the programme.

Tumpa Samadder, Chairperson of the department, told UNB the music festival is very special this year, as artistes will perform songs created from the early days of the country’s musical history till date.

Both of these separate units were brought under a single departmental administration on August 1, 1994 and named as the Department of Theatre and Music.

In 1995, the department introduced two MA programmes -- one on Music and another on Theatre.

In 1998, the Department of Music introduced 4-year Honours and one-year Master’s dgree course on Classical, Folk, Tagore, Nazrul songs and instrumentals. MPhil and PhD degrees were also included and started from 2000.

In 2009, the Music Department started its journey as an individual department.

Currently, over 250 students are studying for Honours and Master’s degrees on Tagore, Nazrul and Folk songs, and Classical Music.