Jute mills back into production as workers postpone strike 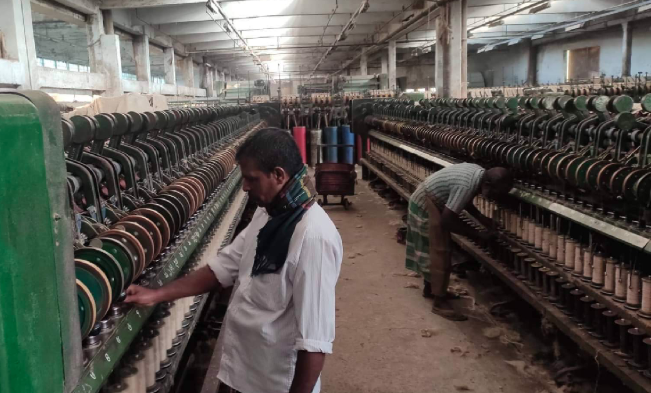 Workers of nine state-owned jute mills in Khulna and Jashore on Saturday postponed their ongoing unto-death hunger strike for three days upon assurance of fulfilling their demands.

“The unto-death fast was postponed at 1:15am for three days,” said Shahana Pervin, CBA president of Platinum Jute Mills.

She also said the workers will go on the hunger strike again on December 17 if their demands are not met.

As soon as the strike was called off, the production in eight state-owned jute mills resumed at 10am while at Crescent Jute Mills in Khulna around 2:30pm.

Humayun Kabir, general secretary, CBA of Platinum Jute Mills, said they postponed the strike upon assurance of fulfilling their demands by State Minister for Labour and Employment Begum Monnujan Sufian.

Munnujan urged them to call the strike off on Friday night at a meeting at Khulna Divisional Labour Office and assured them of placing their 11-point demand at a meeting scheduled to be held on December 15 in Dhaka, Humayun added.

On Thursday, Abdur Sattar, 55, a worker of Platinum Jute Mills, fell sick at one stage of hunger strike and died at Khulna Medical College Hospital (KMCH).

Besides, more than 200 workers fell sick and were taken to Khulna Medical College Hospital.

Production at nine state-owned jute mills remained suspended since December 10 when the workers went on strike.

They tried to force the government to accept their 11-point demand that include implementation of the wage commission, payment of regular wages, cancellation of public-private ownership of mills and allotting necessary fund for jute sector.

The workers said they were not paid regularly and were forced to come out on the streets demanding improvement in the situation.