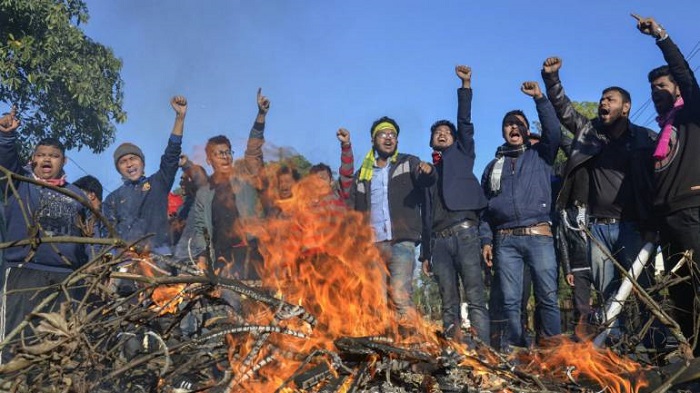 As violent protests against recently passed Citizenship Amendment Bill (CAB) flared up in India's northeast, the United States, Britain and Canada have issued travel advisories to their citizens to "exercise caution" while travelling to the region.

"U.S. citizens in the northeastern states of India should exercise caution in light of media reports of protests and violence in response to the approval of the Citizenship (Amendment) Bill. Government curfews are in place in some areas. Internet and mobile communications may be disrupted. Transport may be affected in various parts of the region. Protests have also been reported in other parts of the country. The U.S. government has temporarily suspended official travel to Assam," reads an advisory issued by U.S. embassy in India.

The protesters clashed with police and resorted to arson at several places. On Thursday two people were killed and several others injured after police fired on protesters in Assam.

The protests Friday spread to India's eastern state of West Bengal, where protesters torched railway property. Clashes between students and police over CAB also broke out in Delhi.

CAB was passed by both houses of Indian parliament this week. Indian President Ram Nath Kovind has given his assent to the new legislation.

The law aims at granting citizenship to illegal immigrants belonging to six religions - Hinduism, Sikhism, Buddhism, Jainism, Parsi and Christianity - from Bangladesh, Afghanistan and Pakistan. However, it has kept out Muslim immigrants from applying for citizenship.

Opposition parties and civil society members in India criticize the bill as contrary to secular principles enshrined in India's constitution as it excludes Muslims.

With this new law, the government would grant Indian citizenship to those non-Muslim immigrants who had entered the country illegally until Dec. 31, 2014. People in the northeastern states fear granting of citizenship to immigrants would endanger their status.

Two Bangladeshi ministers have cancelled their planned visits to India and Japanese Prime Minister Shinzo Abe has postponed his scheduled summit with Prime Minister Narendra Modi in Assam in wake of the violent protests.