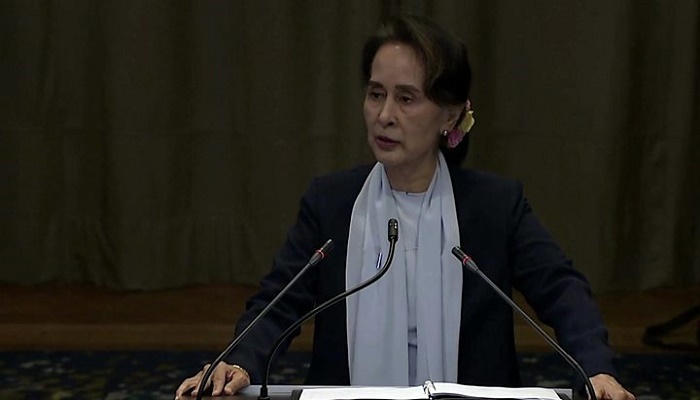 The spectacle of Aung San Suu Kyi, a once-persecuted Nobel peace laureate now defending her country against allegations of genocide over its treatment of the Rohingya minority, has been one of bewildering irony, reports BBC.

In the years after she was released from house arrest in 2010, princes, presidents and prime ministers welcomed Aung San Suu Kyi with open arms into their own opulent homes.

The feel-good factor of rubbing shoulders with someone who had dedicated much of her adult life to the pursuit of democracy was irresistible.

Then, the grandeur of the Peace Palace in The Hague - a marble-floored monument to global harmony - would have been comfortable surroundings for Myanmar's Nobel Peace Prize winner. A native habitat, even.

But not now. There was no red carpet, welcoming committee or brass band.

Instead the light pouring through the stained glass of the Great Hall of Justice illuminated an often haunted-looking figure who had chosen to come and listen to descriptions of some of the most unimaginably gruesome acts. Acts said to have been committed in her country.

After two years on trial in the court of international public opinion, Aung San Suu Kyi was now trying to win over the 17 judges at the International Court of Justice (ICJ) - as she defended the same Myanmar military which had taken away her freedom for 15 years.

It was something she - and the rest of the world - surely never imagined would happen.

The cognitive dissonance of a faded beacon of universal human rights arguing against the horrific testimony of some of the 740,000 Rohingya Muslim refugees who had her fled her country pulsed through The Hague this week.

I realised that she was taking her seat in court 28 years to the day after she had accepted her Nobel prize, in absentia. It was a quirk of history that defined the slow-motion transformation of Aung San Suu Kyi's global standing.

I will long remember certain images from this remarkable week.

There were the Rohingya survivors who'd travelled from the crushing bleakness of Cox's Bazar - the largest refugee camp in the world - to be guests in the court.

Every morning, they arrived in the same type of sparkling executive transport as Ms Suu Kyi: afforded the same comfort as the leader of the country accused of trying to exterminate their people. For these three representatives of their stateless community, the scales of justice had finally levelled, if only for a few hours.

Then there was the face of Aung San Suu Kyi, possibly hearing for the first time in such brutal detail the crimes alleged to have been perpetrated by the Burmese Army in their clearance operation in Rakhine state in August 2017.

Such was the interest in Aung San Suu Kyi's appearance, they had to open a second room to contain the international media. There were rueful shakes of the head, gentle intakes of breath as lawyers for The Gambia read out graphic accounts from Rohingya survivors: pregnant women beaten to death, mass rape, children thrown into fires.

Aung San Suu Kyi may have sat alongside her legal team and a small Burmese delegation but she often cut a lonely figure. She is a leader who has alienated herself from former friends in the West and taken refuge in the powerful embrace of China, which continues to provide invaluable economic support and political protection in the UN Security Council.

It is the certainty of a Chinese veto on any vote on Myanmar's alleged crimes that has blocked the most obvious path to justice for the Rohingya: a referral to the International Criminal Court (ICC).

Aung San Suu Kyi's decision to come here ensured this would always become a massive spectacle and one which marked the end of any lingering hope in the West that she would distance herself from the army she doesn't control.

After two years of blistering international criticism for failing to use her moral authority to stand up for the Rohingya, she is now the permanent face of the legal defence of some of the worst abuses imaginable.

The generals, safe for now and far from the winter chill of The Hague, have watched a Nobel Peace Prize winner trying, in many people's eyes, to defend the indefensible. They wouldn't have it any other way.