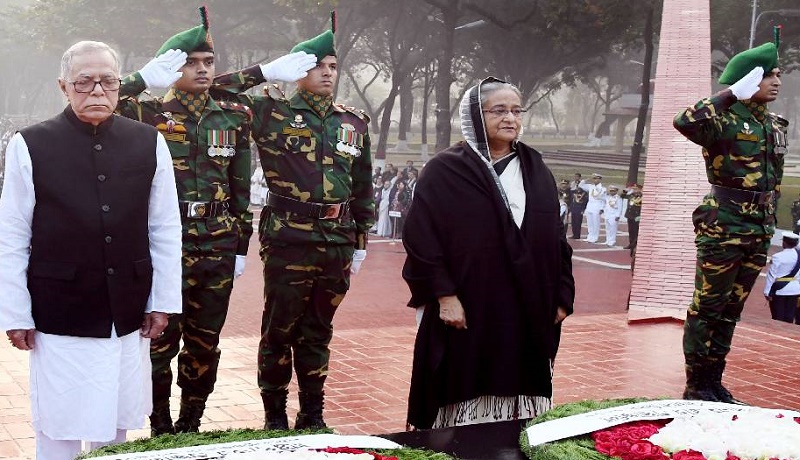 President Abdul Hamid and Prime Minister Sheikh Hasina on Saturday paid rich tributes to the martyred intellectuals on the occasion of the Martyred Intellectuals Day.

First the President and then the Prime Minister placed wreath at the Martyred Intellectuals Memorial in Mirpur.

After placing the wreath, both stood in solemn silence for some time as a mark of profound respect to the memories of the illustrious sons of the soil.

A smartly turned out contingent of Bangladesh Armed Forces gave a state salute while the bugle played the last post at that time.

Later, the President talked to the war-wounded freedom fighters and the family members of the martyred intellectuals and enquired about their wellbeing.

Flanked by central leaders of the party, Sheikh Hasina, also the president of Bangladesh Awami League, placed another wreath at the Martyred Intellectuals Memorial as the party chief.

The prime Minister later went to Dhanmondi in the capital and placed a wreath at the portrait of Father of the Nation Bangabandhu Sheikh Mujibur Rahman in front of Bangabandhu Memorial Museum, marking the Martyred Intellectuals Day.

After placing the wreath, she stood there for some time as a mark of profound respect to the memory of Bangabandhu, the architect of the country’s independence.

Flanked by central leaders of the party, Sheikh Hasina laid another wreath at the portrait of Bangabandhu as the party chief.

On this night in 1971, Bangalee intellectuals, including professors, journalists, doctors, artistes, engineers and writers, were picked up in Dhaka by the Pakistani occupation forces in collusion with their local collaborators.

The intellectuals were taken to torture cells in Mirpur, Mohammadpur, Nakhalpara, Rajarbagh and other locations in different parts of the city and later executed en masse at different killing grounds, most notably Rayerbazar and Mirpur.