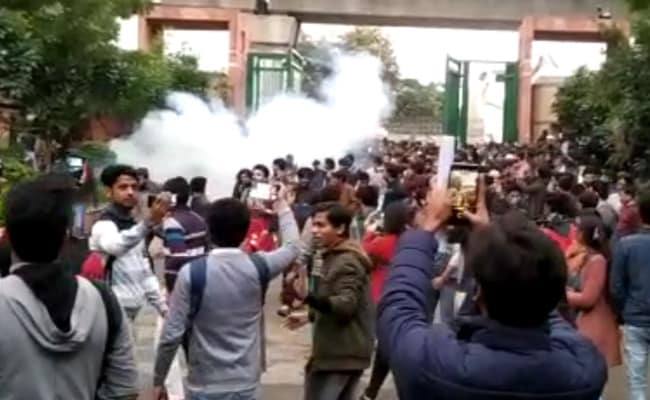 Hundreds of students from the Jamia Millia Islamia University clashed with police in Delhi today, after they were prevented from taking out a protest march to the Parliament House against the amended Citizenship Act. Police detained 50 protesters as the violence spiralled out of control and a ban on large gatherings was imposed in the area.

Police used tear gas shells and batons in an attempt to disperse the agitating students while they were leaving the university premises. Many mediapersons were also targeted in the course of the incident.

Footage of the incident showed police caning protestors clambering over barricades erected to stop them. The police and students have both accused each other of starting the violence. "We were marching peacefully when the police stopped us. Then they lathi-charged us in an attempt to make us retreat," news agency PTI quoted a law student at the university as saying. However, a senior police officer at the spot insisted that the protesters had attacked first -- forcing them to retaliate with teargas shells.

Even the university proctor's attempts to alleviate the situation failed, with student leaders threatening to continue protesting until the amended Citizenship Act is repealed. Agitators detained by the police have been taken to the Badarpur police station.

Amanatullah Khan, the Aam Aadmi Party MLA of the area, rushed to the spot to take stock of the situation.

The Delhi Metro Rail Corporation (DMRC) briefly closed the Patel Chowk and Janpath stations to prevent the students from using them to reach the parliament, where the controversial bill was passed on Wednesday night. "As advised by the Delhi Police, the entry and exit gates of Patel Chowk and Janpath metro stations have been closed. Trains will not halt at these stations," the metro authority said in a tweet.

Both the stations reopened about an hour later.

The clashes in the national capital come at a time when much of the Northeast is witnessing violent protests against the amended law, which aims to expedite citizenship for non-Muslim migrants from Bangladesh, Pakistan and Afghanistan. While rights activists and opposition parties have termed the law as "unconstitutional" and "discriminatory", activists in the Northeast claim that it will undermine the Assam Accord-1985 and flood the region with illegal migrants from neighbouring Bangladesh.