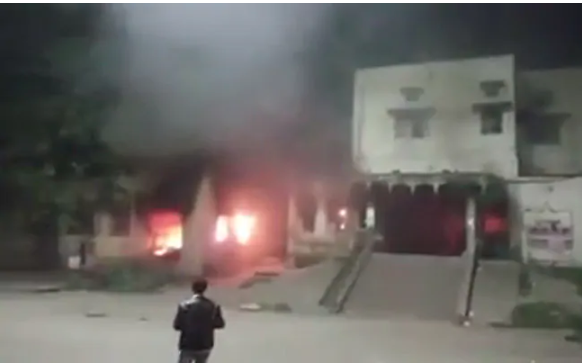 "The protesters all of a sudden entered the railway station complex and set the platform, two-three buildings and railway offices on fire. When RPF personnel tried to stop them, they were brutally beaten up," a senior RPF official told news agency PTI.

Train services have been impacted in the Murshidabad district that borders Bangladesh.

Protesters also blocked tracks at the Uluberia railway station in Howrah district and vandalised the complex and some trains, injuring a driver, PTI reported.

The Citizenship (Amendment) Act, which intends to make it easier for non-Muslim migrants from Bangladesh, Pakistan and Afghanistan to obtain Indian citizenship, has been accused by rights groups and opposition parties of being discriminatory and violating the constitutional right to equality.

Bengal Chief Minister Mamata Banerjee -- one of the most vocal critics of the Citizenship Amendment Act -- has warned that she will not allow its implementation in her state "under any circumstances", and announced a series of rallies against it. "We will not allow the Citizenship Act in Bengal even though it has been passed in the parliament," she said today, accusing the centre of trying to force an "unconstitutional" law on non-BJP states.

"The Citizenship Act will divide India. As long as we are in power, not a single person in the state will have to leave the country," she has said.

Apart from Bengal, there have also been violent protests over the amended Citizenship Act in the Northeast, particularly Assam, where two protesters were killed in police firing on Thursday evening. The army has been patrolling districts across Assam.

Northeastern states fear the law will lead to legitimizing of immigrants from neighbouring Bangladesh and change the demographics of the region.

Amid the protests, three high profile visits have been cancelled. Japanese Prime Minister Shinzo Abe, who was to attend a summit in Assam's Guwahati next week, has cancelled his visit. Two Bangladesh ministers have also called off their visit.