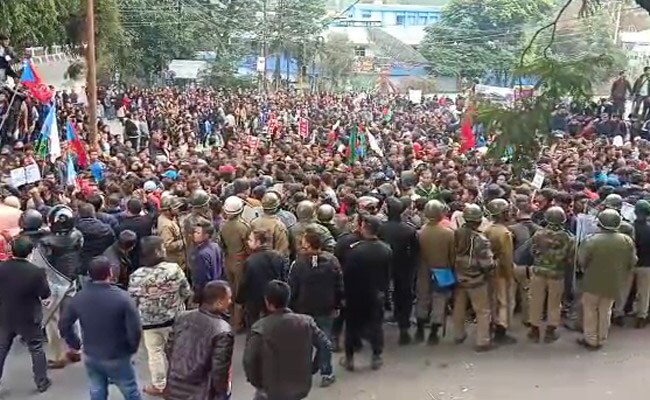 A massive crowd protesting against the Citizenship (Amendment) Act in Meghalaya's capital Shillong was tear-gassed and lathi-charged by the police this evening after they reportedly threw stones at the police near the Raj Bhavan. Thousands of people are on the streets of Shillong to protest against the Citizenship (Amendment) Act.

Footage shot from cellphones showed people being brought in to Shillong's Civil Hospital with injuries to their legs and bodies.

The incident comes after the curfew that was imposed in parts of Shillong following violent protests was relaxed for 12 hours, starting 10 am this morning. Mobile internet and SMS services have been blocked across the state for two days after unrest flared on Thursday over the Citizenship (Amendment) Act.

Markets remain shut and no transportation is available across Shillong. Mobile phone videos shot by locals showed at least two cars on fire and a scramble to shut the town's main shopping street, the Police Bazar. Another video posted on Twitter claimed to show a massive torch light rally being taken out on one of the town's main road.

In the Williamnagar town, 250 km from Shillong, anti-Citizenship Act protestors heckled Chief Minister Conrad Sangma, as he landed from a chopper to take part in an event to mark the death anniversary of a freedom fighter.

Young men and women holding banners were filmed shouting 'Conrad go back' in front of the chief minister's convoy.

The Meghalaya police, through its Twitter handle, appealed to people not to spread misinformation and also announced the curfew in Shillong and the suspension of SMS and mobile internet services.

In neighbouring Assam, violent mobs torched buildings and clashed with the police, leaving at least two dead. Though no major incident of violence was reported from Tripura, state capital Agartala observed a shutdown, with educational institutions and offices closed.

The protests in the north-eastern states were triggered by the passage of the Citizenship (Amendment) Bill, which promises citizenship to non-Muslim minorities from Pakistan, Bangladesh and Afghanistan, in the Rajya Sabha yesterday.

While opposition parties have called the law unconstitutional for making religion a criteria for immigration, residents in ethnically-diverse northeastern states like Assam and Tripura have launched protests because it stands to give citizenship to large numbers of Hindus who have emigrated from Bangladesh in recent decades.

In a tweet on Thursday, Prime Minister Narendra Modi urged calm and said the people of Assam had nothing to fear. "I want to assure them - no-one can take away your rights, unique identity and beautiful culture. It will continue to flourish and grow," he wrote.