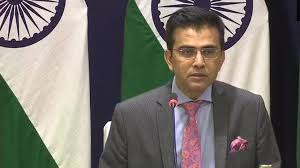 "We have been informed by Bangladeshi side that the change in programme was due to domestic issues related to commemoration of Bangladesh Victory Day on December 16," official spokesperson at the Indian Ministry of External Affairs Raveesh Kumar told reporters at a briefing in New Delhi on Thursday.

He termed speculation linking the cancellation of the visit to the Indian Parliament’s adoption of the Citizenship Amendment Bill "unwarranted."

The MEA spokesperson ruled out the speculation, saying: "There have been unwarranted speculations..."

Earlier, the Ministry of Foreign Affairs here said the scheduled visit of Foreign Minister Dr Momen to New Delhi on Thursday was cancelled due to his ‘busy schedule’ at home ahead of Martyred Intellectuals Day and Victory Day.

“Yes, he (Dr Momen) is not going as he needs to attend some important programmes here,” a senior official told UNB confirming the cancellation of the planned visit.

State Minister for Foreign Affairs M Shahriar Alam will leave for Madrid on Friday while Foreign Secretary M Shahidul Haque is leading a Bangladesh delegation at The Hague currently, the official added.

Dr Momen is likely to visit India in January, another official told UNB.

The Foreign Minister was scheduled to leave here for New Delhi on Thursday afternoon on a three-day visit to attend the sixth edition of the Indian Ocean Dialogue (IOD) and have discussion on bilateral issues with his Indian counterpart Dr S Jaishankar on the sidelines.

In the backdrop of violence in India's state of Assam spilling over to Bangladesh Assistant High Commission in Guwahati, Acting Foreign Secretary Kamrul Ahsan on Thursday held a meeting with Indian High Commissioner to Bangladesh Riva Ganguly Das at the Ministry of Foreign Affairs and called for the protection of personnel and property of the Mission by the host government.

It came after the security vehicle escorting the Assistant High Commissioner from the airport to the city was attacked by mobs on Wednesday. Two signposts of the Mission approximately 30 yards away from the chancery premises were also torn down by agitators on Thursday.

Riva Ganguly assured that the authorities concerned of the Indian government are being immediately alerted to enhance security of the chancery and residential premises.

The sixth edition of the Indian Ocean Dialogue will be held on Friday where a Bangladesh delegation, now sans the foreign minister, will attend. The IOD is part of Indian Ocean Rim Association's (IORA) endeavours to enhance Indo-Pacific collaboration in maritime security, economic cooperation, disaster risk management, and blue economy, said an official.