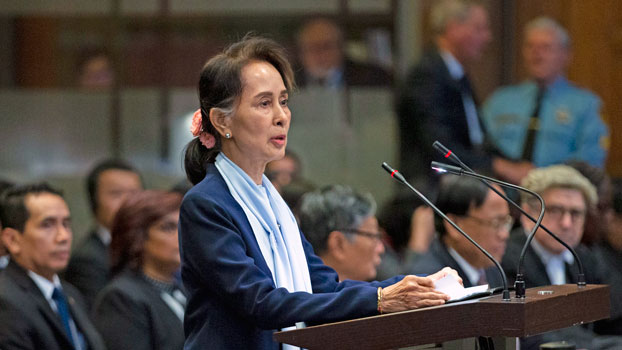 Nobel peace laureate Aung San Suu Kyi urged UN judges on Thursday to throw out a genocide case against Myanmar, warning it risked reigniting the crisis that forced nearly three quarters of a million Rohingya Muslims from their homes.

In her closing arguments after a three-day hearing at the International Court of Justice, Myanmar's de facto civilian leader issued a stark warning to judges that allowing The Gambia's case against Myanmar to go ahead could "undermine reconciliation".

Suu Kyi, whose defence of the same generals she once defied has shredded her reputation abroad as a rights icon, even showed pictures of a football match recently played in the area affected by the violence in 2017 as evidence that was peace was returning

"I pray that the decision you make with the wisdom and vision of justice will help us to create unity out of diversity," said Suu Kyi, who wore traditional Burmese dress and flowers in her hair.

"Steps that generate suspicions, sow doubts or create resentments between communities who have just begin to build the fragile foundation of trust could undermine reconciliation," she added in the short six-minute statement.

"Ending the ongoing internal conflict... is of the utmost importance for our country. But it is equally important to avoid any reignition of the 2016-17 internal armed conflict in northern Rakhine."

Dozens of her supporters gathered outside the court in The Hague and nosily chanted "We stand with you Aung San Suu Kyi" as she arrived to give her speech.

The small African, mainly Muslim state of Gambia has taken majority-Muslim Myanmar to the UN's top court in The Hague accusing it of breaching the 1948 UN genocide convention.

Backed by the 57-nation Organisation of Islamic Conference, Canada and the Netherlands, it is seeking emergency measures to prevent further violence against the Rohingya, pending a fuller case that could take years.

Around 740,000 Rohingya fled across the border into sprawling refugee camps in Bangladesh after Myanmar launched a huge military crackdown in Rakhine state in August 2017.

Suu Kyi told the court in her opening statement on Wednesday that there was no proof of "genocidal intent" and said the army operation was in response to attacks by Rohingya militants.

The Gambia earlier Thursday condemned Suu Kyi's "silence" in her opening speech about the alleged abuses.

"The word 'rape' did not once pass the lips of the agent," Sands added, as Suu Kyi sat impassively in the courtroom.

Paul Reichler, another of The Gambia's lawyers, dismissed Suu Kyi's insistence that Myanmar's military should be left to probe the allegations itself.

"How could anyone expect the Tatmadaw (Myanmar military) to investigate when six of its top generals... have all been accused of genocide by the UN fact-finding mission?" he asked.

He said that those killed included "infants beaten to death or torn from their mothers' arms and thrown into rivers to drown. How many of them were terrorists?

"Armed conflict can never be an excuse for genocide," he said.

The lawyer said Suu Kyi had also failed to deny the conclusions of a 2018 UN investigation that found that genocide had been committed in Myanmar against the Rohingya.

"What is most striking is what Myanmar has not denied," Reichler said.

Reichler added that Suu Kyi in her speech to the court had also followed Myanmar's "racist" policy of refusing to refer to the Rohingya Muslim minority by their name.

Gambian Justice Minister Abubacarr Tambadou pushed the court to impose the emergency measures, saying there was a "serious and imminent risk of genocide recurring" and that "the lives of these human beings are at risk."

A decision on the emergency measures sought by Gambia could take months, while a final ruling if the ICJ decides to take on the full case could take years.