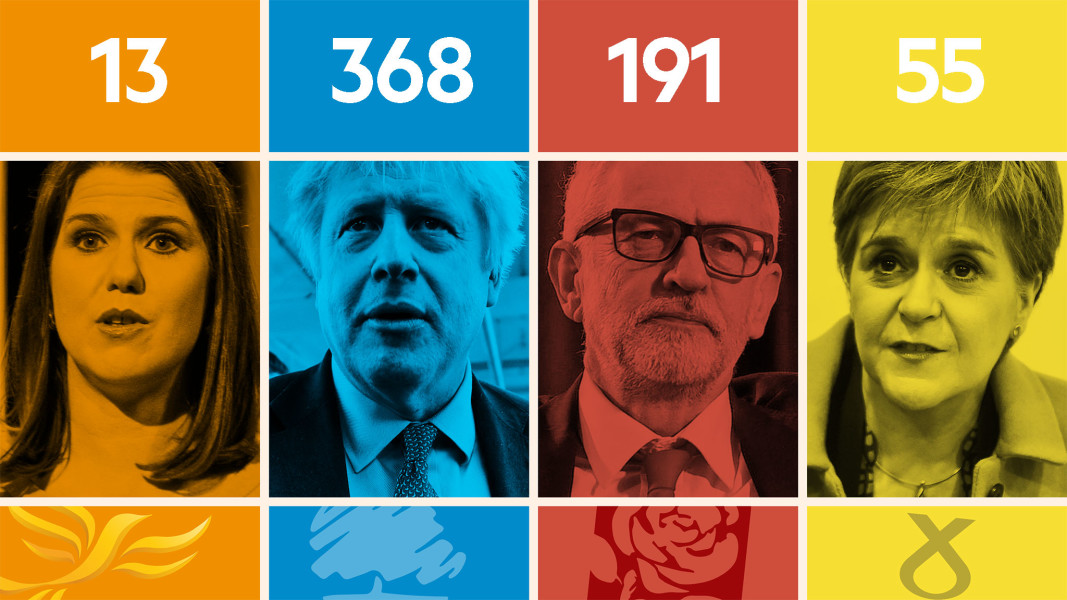 If early exit polls are any indication, Conservatives have won a huge victory in U.K.'s closely watched general election.

Britain went to the polls for the third time in five years Thursday to determine whom the public wants to resolve the stalemate over Brexit.

In an exit poll released at 10 p.m. local time, with the Conservative Party winning 368 seats and the Labour Party taking 191. The victory would mean a clear vindication for Brexit-champion Boris Johnson, who would remain as prime minister.

Polling booths in the historic election opened at 7 a.m. local time and closed at 10 p.m. -- which is five hours ahead of Eastern Standard Time in the United States.

The official results are expected to be announced Friday morning.

Johnson, the prime minister and leader of the Conservative Party, called the election to secure the majority he needs to get his Brexit deal through Parliament. His primary opponent, Jeremy Corbyn, the leader of the opposition Labour Party, has said he will hold a second referendum on Brexit if his party comes into power.

The election has been hailed on all political sides as the “most important vote in a generation.”

The public cast their votes in all 650 constituencies throughout the United Kingdom, with the outcome determining how many seats each political party secures in the House of Commons.

Both Johnson and Corbyn were seen casting their votes in their local constituencies Thursday morning.

At the last general election in 2017, Theresa May, the prime minister at the time, lost the Conservatives’ governing majority, which ultimately shot down her attempts to get her Brexit deal through Parliament. After she resigned, Johnson replaced her this summer with the promise to secure Brexit by the October 31 deadline.

Another key issue during the campaign has been accusations of Islamophobia leveled at the Conservative Party, and anti-Semitism in the ranks of the Labour Party.

“Brexit is still a key issue, but the Labour Party has wanted to fight the election on other issues where they feel they have a stronger position in the electorate, particularly on issue of health,” she told ABC News. “Here they have focused on trade with the U.S. and issues around parts of the NHS being open to U.S. markets for drugs and medicines.

"So the NHS has focused heavily in the campaign,” she added.

The final poll by the major election tracker YouGov, which predicted how 93% of seats in the 2017 general election, projects that the Conservative Party will win 339 seats. That would give them a governing majority of 28.

However, due to the margin of error involved, they have not ruled out a "hung Parliament" -- which means no political party will have a majority to govern effectively.