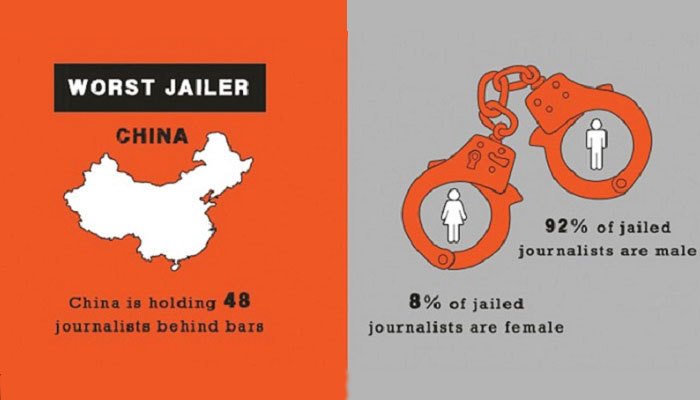 For the fourth consecutive year, at least 250 journalists have been imprisoned around the world in 2019 so far as authoritarian governments show no signs of letting up on critical media, according to the Committee to Protect Journalists (CPJ).

In its annual global survey, the CPJ found at least 250 journalists in jail in relation to their work, compared with an adjusted 255 a year earlier. The highest number of journalists imprisoned in any year since the CPJ began keeping track is 273 in 2016. After China, Turkey, Saudi Arabia and Egypt, the worst jailers are Eritrea, Vietnam, and Iran.

According to the survey report, the number of journalists imprisoned globally for their work this year remained near record highs, as China tightened its iron grip on the press and Turkey, having stamped out virtually all independent reporting, released journalists awaiting trial or appeal.

Authoritarianism, instability and protests in the Middle East led to a rise in the number of journalists locked up in the region — particularly in Saudi Arabia, which is now on par with Egypt as the third worst jailer worldwide, the report said.

According to the CPJ, Vietnam remained Asia’s second-worst jailer after China, with 12 behind bars. In all of the Americas, three journalists were jailed.

While the majority of journalists imprisoned in different parts of the world face anti-state charges, in line with recent years, the number charged with “false news” rose to 30 compared with 28 last year.

Use of the charge, which the government of Egyptian President Abdel Fattah el-Sisi applies most prolifically, has climbed steeply since 2012 when the CPJ found only one journalist in the world facing the allegation.

In the previous year, repressive countries, including Russia and Singapore, have enacted laws criminalising the publication of “fake news”.

This year’s census marks the first time in four years that Turkey has not been the world’s worst jailer, but the reduced number of prisoners there does not signal an improved situation for the Turkish media. Rather, the fall to 47 imprisoned journalists from 68 last year reflects successful efforts by the government of President Recep Tayyip Erdogan to stamp out independent reporting and criticism by closing down more than 100 news outlets and lodging terror-related charges against many of their staff.

The CPJ observed that 98 per cent of the journalists jailed worldwide are locals covering their own country. Three of the four journalists with foreign citizenship are imprisoned in Saudi Arabia, and the fourth in China.

It also found that 20 of the jailed journalists — or 8pc— are female, compared with 13pc last year.

Politics was the beat most likely to land journalists in jail, followed by human rights and corruption. More than half of those imprisoned were reporters publishing online, the CPJ added.

“The imprisonment of a single journalist is a terrible injustice that has far-reaching consequences for families, friends, and colleagues,” said Joel Simon, the CPJ’s executive director. “But the imprisonment of hundreds of journalists — year after year — is a threat to the global information system on which we all depend. Repressive governments are using these cruel tactics to deprive their own societies and the entire world of essential information,” he said.