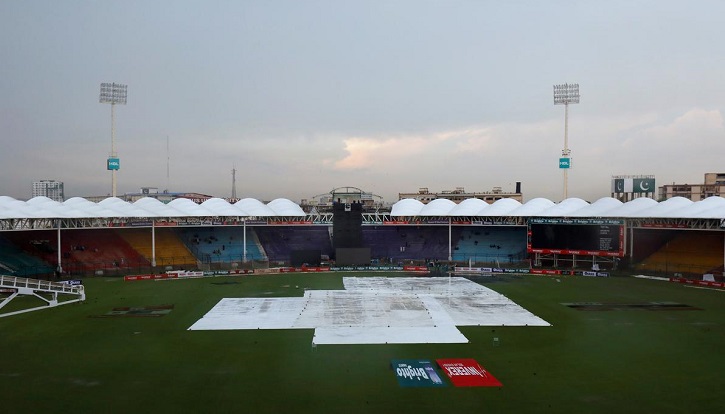 Sri Lanka resumed their innings at 222-5 Thursday after a nearly three-hour rain delay in Rawalpindi, the venue for Pakistan's first home Test since a deadly attack in 2009.

The teams took an early lunch, during which the rain stopped and the umpires inspected the ground and the pitch before restarting play at 1:45pm (0845 GMT).

Dhananjaya de Silva resumed on 54, his sixth Test half-century, while Niroshan Dickwella was 15 not out after Sri Lanka added 20 runs in their overnight total of 202-5.

Earlier, the brief period of play of 7.5 overs saw wicketkeeper Mohammad Rizwan claim a catch to dismiss de Silva off the bowling of 16-year-old Naseem Shah, but third umpire Richard Illingworth ruled the ball had bounced.

On the next ball de Silva completed his half-century with two runs off Naseem, who with 2-65 was the pick of Pakistan's bowlers.

The Test is the first in Pakistan since a militant attack on the Sri Lankan team bus killed eight people in March 2009, suspending international cricket in the country as foreign teams refused to visit over security fears.