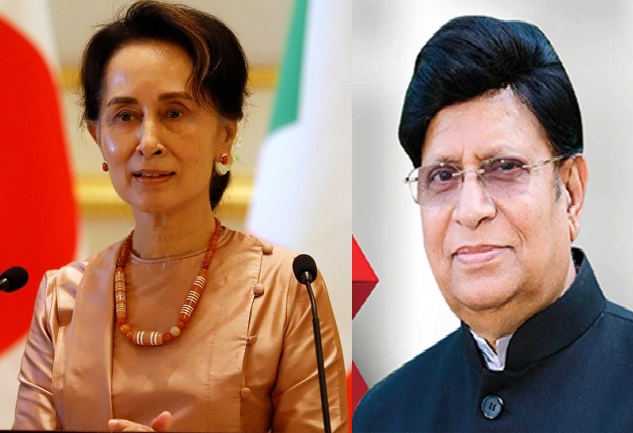 Foreign minister Dr AK Abdul Momen said he was saddened to see Myanmar leader Aung San Suu Kyi’s moral degradation that dragged her to The Hague to defend genocide charges while she was once an icon of democracy and human rights.

“She was an icon of democracy and human rights. I feel sad seeing her moral degradation,” he told newsmen at his office as hearing was underway on Myanmar’s military-led genocide in the International Court of Justice (ICJ) virtually exposing Nobel Peace Prize winner Suu Kyi to the dock.

Momen said Momen said he himself joined the street demonstrations several times demanding her release from Myanmar’s military custody years ago while with the passage of time she appeared in The Hague to defend the genocide charges.

The minister’s comments came as newsmen after his back to back meetings with Japanese and US ambassadors in Dhaka Ito Naoki and Earl R. Miller.

“I hope she (Suu Kyi) will get back her insight (to stand for human rights),” Momen said.

He said Suu Kyi’s role forced seven fellow Nobel peace laureates to issue a joint statement to saying she too must be held “criminally accountable along with her army commanders” for the genocide and crimes committed against the minority Rohingyas in Myanmar.

Momen was simultaneously appreciated highly Gambia for bringing the charges in the ICJ saying “we feel proud that a country like Gambia came forward with the case”.

“Yesterday’s hearing was a good one,” he said referring to the deposition of Gambia against Myanmar atrocities.

The foreign minister said “Bangladesh wants to see that Rohingyas are going back to their homeland in Rakhine State and live there peacefully”.

He said, accountability and justice need to be ensured to prevent recurrence of such crimes against Rohingyas.

Addressing the judges in The Hague, Myanmar leader admitted that the army might have used “disproportionate force” but said that did not prove it was trying to wipe out the minority group.

Gambia has taken Myanmar to the International Court of Justice (ICJ) over a bloody 2017 military crackdown killing thousands of people and forcing around 740,000 Rohingyas to flee to neighbouring Bangladesh.