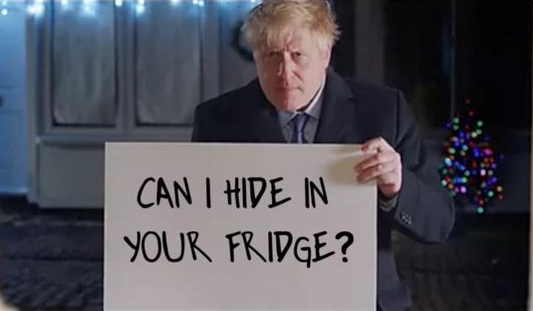 Boris Johnson retreated into a large fridge today after a Good Morning Britain reporter ambushed him to ask him to appear on the show.

In a clip of the incident, one of the PM's aides can be seen mouthing 'oh for f***'s sake' as the reporter approaches the group while Johnson joined an early morning milk round in Yorkshire.

The ITV show's hosts Piers Morgan and Susanna Reid exclaimed loudly in shock as they watched live from the studio.

During the exchange, reporter Johnathan Swain asks the PM if he will come on the programme and "deliver on your promise to talk to Piers and Susanna".

The PM replies to say "I'll be with you in a second" and walks off, before Piers exclaims "he's gone into the fridge".

A camera crew then follows the PM as he can be seen disappearing behind stacks of milk crates and into the large fridge at the delivery depot.

A Tory source later stressed no one "hid in a fridge".

"I'm actually being pushed and shoved at the moment as well by one of the minders," Swain says, as the cameras are ushered away.

Swain then asks the minder, named on GMB as press secretary Robert Oxley, to "tone your language down", as the segment appeared live on ITV.

Tory sources said Mr Oxley was not swearing at the reporter and was expressing general frustration.

The party is also believed to be making a formal complaint about Good Morning Britain's behaviour.

The Conservative Party leader was delivering milk in the marginal seat of Pudsey, West Yorkshire this morning, as he continues his whistle-stop tour of key battleground electorates on the eve of the election.

Both the Tory PM and Labour leader Jeremy Corbyn are making five stops each on their final tours around the UK in a final election push.

Johnson is campaigning in Yorkshire, pushing his "get Brexit done" message to voters.

Corbyn issued a "vote for hope" message last night, focusing on Labour's pledge to "save our NHS."

Following the incident, Piers issued a direct appeal to Johnson, saying: "I've known you for 25 years. What's the matter with you?

"You're a good bloke normally, you have no problem with interviews, you bluster your way through them.

"Why would you rather look like a bottle job?"

Piers then told reporter  Swain: “I’d like to know what Oxley, who’s the press secretary, what the hell he thinks he’s doing talking to you in that way and being that physically aggressive with you?

“That’s not the behaviour we expect from a press secretary whose salary by the way will be paid ultimately by we the taxpayer. It’s outrageous”.

He added ITV’s reporter had been “roundly abused and physically assaulted by his press secretary - absolutely disgraceful”.

Piers said: “Tell Oxley to stop abusing you and stop using foul language, stop physically barring you from getting near the Prime Minister whose salary is paid by us. The clock is ticking”.

Swain said he later got an “absolute earful” from the press secretary who was “furious” at the “stunt”.

“He could be talking to you guys on air and delivering his manifesto and his promises to the electorate.

“We need to hear from him. He’s the Tory party leader, it’s the last day of the campaign.

"I explained that. He said we will give you an interview but it won’t be today. If it’s not going to be today, when is it going to be?”

Swain added of the aide's reaction: “He thinks it was a stunt, why did we turn up, we weren’t invited etc, we got in the way of everyone else’s shot.”