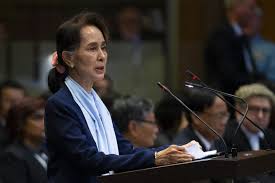 Aung San Suu Kyi is speaking in Myanmar's defence at the UN's top court on Wednesday, a day after the former democracy icon was urged to "stop the genocide" against Rohingya Muslims.

The small African state of Gambia has taken Myanmar to court over a bloody 2017 military crackdown in which thousands of people were killed and around 740,000 Rohingya fled to neighbouring Bangladesh.

The case, the first international legal attempt to bring Myanmar to justice over alleged mass killings of the Rohingya minority in 2017, comes after the Gambia on November 11 filed an application at the ICJ, accusing Myanmar of violating the 1948 Genocide Convention.

Once hailed internationally for her defiance of Myanmar's junta, the Nobel peace laureate will this time be on the side of the southeast Asian nation's military when she takes the stand at the International Court of Justice.

Suu Kyi is expected to tell ICJ judges that Myanmar was conducting legitimate operations against Rohingya militants, that it has carried out its own investigations into the bloodshed and that the court has no jurisdiction in the case.

Huge crowds are expected to turn out in Yangon to watch Suu Kyi speak via livestream amid a groundswell of support in Myanmar, where the woman dubbed "The Lady" is still widely loved.

Gambian Justice Minister Abubacarr Tambadou said it would be "extremely disappointing" if Suu Kyi repeated her previous denials of wrongdoing by Myanmar.