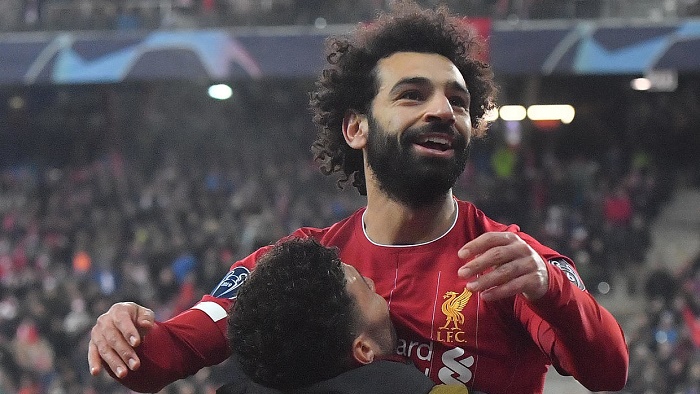 Liverpool manager Jurgen Klopp praised his side's "intensity" after two goals in as many minutes from Naby Keita and Mohamed Salah meant they avoided an embarrassing early Champions League exit by winning 2-0 in Salzburg on Tuesday.

The European champions needed to avoid defeat against the Austrian title-holders to book their place in the last 16 and victory ensured they did so as winners of Group E ahead of Napoli.

Salah had been guilty of missing a host of big chances as Liverpool walked a tightrope for nearly an hour, but made amends with a sumptuous finish from a narrow angle after Keita's header had settled the holders' nerves.

"What a team," Klopp told BT Sport. "What an effort. It was a tough game.

"In the second half they (Salzburg) couldn't cope with the intensity. We scored two wonderful goals. We could have scored six or seven which is crazy. We won the group, we won the game, all good.

"When we had the ball we had sitters and didn't score. Then Mo (Salah) scored the most difficult situation of the whole night -- he scored that goal," the German added.

Salzburg had scored 87 goals in 24 previous games this season, including three when Liverpool edged a seven-goal thriller between the two back in October.

But Norwegian wonderkid Erling Braut Haaland was thwarted as the Reds recorded their first clean sheet in the Champions League this season.

Liverpool needed goalkeeper Alisson Becker to be at his best early on as the Brazilian blocked from Takumi Minamino and Haaland.

However, the better chances were coming for the Premier League leaders at the other end.

Salah dragged his first big chance wide on his favoured left foot at the end of a brilliant Liverpool break from one end of the field to the other.

Keita had been rewarded for his goalscoring return to the team in Saturday's 3-0 win at Bournemouth and seemed keen to make a mark against his former side.

But the Guinea midfielder failed to beat Cican Stankovic when played in by Salah's slick reverse pass in first-half stoppage time.

Salah was the culprit of more missed opportunities at the start of the second half when he fired over from Sadio Mane's brilliant through ball and seconds later he was denied by Stankovic as he tried to round the goalkeeper.

Liverpool's profligacy could have been punished when Haaland had his big chance to live up to the hype linking him with a host of Europe's top clubs, but the 19-year-old hit the side-netting with just Alisson to beat.

Seconds later the visitors finally made the breakthrough when the two ex-Salzburg men in Mane and Keita combined.

Stankovic rashly rushed off his line as Mane sped onto Andy Robertson's pass and his dinked cross was headed into an unguarded net by Keita.

A minute later, any hope left for Salzburg to spring an upset evaporated when Salah implausibly scored from the most difficult chance he had all evening.

The Egyptian seemed to have been forced too far wide on his right foot as Stankovic raced from his goal once again, but Salah somehow bent the ball with unerring accuracy into the far corner.

In each of the last two seasons Liverpool have also needed to get points in their final group game before going onto reach the final and no one will want to face Klopp's men again come the knockout stages.

However, a first English title in 30 years may be the priority for the Reds, who now have an eight-point lead over Leicester at the top of the Premier League table.