US tightens sanctions on Myanmar army chief over Rohingya abuses 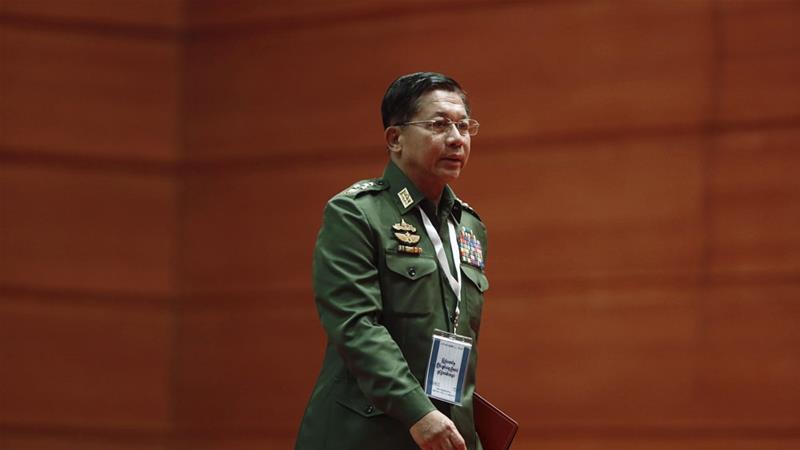 The United States on Tuesday stiffened sanctions against Myanmar's army chief over the mass killings of Rohingya, as his country defended itself against genocide charges before the top U.N. court.

The United States in July banned military chief Min Aung Hlaing from visiting, but Tuesday's move goes further by freezing any U.S. assets and criminalizing financial transactions with him by anyone in the United States.

The Treasury Department imposed the same sanctions on three other senior Myanmar commanders, as well as 14 individuals from other countries, to observe International Human Rights Day.

"America is the world leader in combatting human rights abuse and we will hold perpetrators and enablers accountable wherever they operate."

Myanmar's military is accused of leading a brutal campaign in 2017 in Rakhine state against the Rohingya, a mostly Muslim minority whom the Buddhist-dominated nation does not consider citizens.

Around 740,000 Rohingya fled to neighboring Bangladesh after a bloody crackdown by the Myanmar military in 2017 that U.N. investigators have already described as genocide.

The United States said there were "credible reports" of mass-scale rape and other sexual violence by soldiers under the command of Min Aung Hlaing.

The latest U.S. action came as Myanmar defends itself before the International Court of Justice in The Hague over charges it violated the 1948 genocide convention.

Myanmar's civilian leader Aung San Suu Kyi, a Nobel Peace Prize winner whose reticence on the Rohingya killings has severely tarnished her once iconic image in the West, is personally leading the defense in the case brought by Muslim-majority Gambia.

The United States also took action against a notorious militia in the Democratic Republic of Congo, the Allied Democratic Forces, which is accused of massacring civilians in an apparent bid to stop them from joining the military.

The Treasury Department slapped sanctions on the group's leader, Musa Baluku, as well as five other people accused of supporting the group.

The U.S. also imposed sanctions on five people over abuses in war-torn South Sudan, a Pakistani police superintendent accused of killing people in staged encounters, and a militia commander in Libya.

The Treasury Department also designated one European -- Slovak businessman Marian Kocner, who is accused of ordering the 2018 murder of investigative journalist Jan Kuciak, who was probing high-level graft.