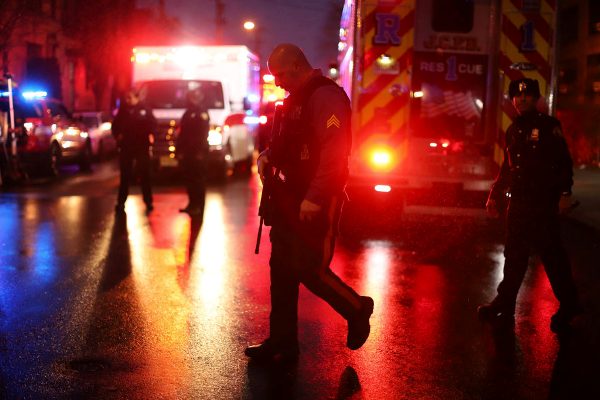 Authorities say six people, including a police officer and three bystanders are dead after a furious gun battle that filled the streets of Jersey City, New Jersey, with the sound of heavy gunfire for about an hour on Tuesday.

The authorities added that there was no indication that it was a terrorism-related incident.

The shooting took place at two scenes, starting at a cemetery, where the officer was gunned down, and continuing at a kosher supermarket, where five more bodies were found, Kelly said.

“Our officers were under fire for hours,” the chief said.

He would not say exactly what set off the shooting but that he believes the officer who was killed was trying to stop some “bad guys”.

Several police officers were shot in the standoff that left a neighborhood, including a school, on lockdown, according to the governor.

Sporadic, heavy gunfire rang out along a major thoroughfare. Swat teams, state police and federal agents responded and police blocked off the area, which has a Catholic school, some stores, a kosher supermarket and a hair stylist.

“Our thoughts and prayers are with the men and women of the Jersey City police department, especially with the officers shot during this standoff, and with the residents and schoolchildren currently under lockdown,” the Democratic governor, Phil Murphy, said.

“I have every confidence in our law enforcement professionals to ensure the safety of the community and resolve this situation.”

Donald Trump also sent thoughts and prayers to the victims, via Twitter, and called the incident “horrific”.

Phones rang unanswered at several businesses in the area. Someone who answered the phone at the Catholic school, which runs from pre-school through eighth grade, said all the children were safe as a lockdown continued. Police tactical teams were going through the school, according to scanner traffic.

Loud volleys of gunfire could be heard at regular intervals but subsided around 2pm in the city, which is just across the Hudson River from Manhattan.

Dozens of bystanders pressed against the police barrier to film the action on cellphones, some whooping when gunfire bursts filled the air.

Andy Patel works at a liquor store about three blocks away from the site of the shooting site and said there had been consistent gunfire for about an hour.

“I can hear the gunshots. It’s like firecrackers going off. They were shooting like crazy about an hour ago. Then it stopped for like 20 or 30 minutes. The cops were clearing everyone off the streets,” said Patel.

Jersey City police said they had no information to provide over the phone.

The White House spokesman, Hogan Gidley, said Donald Trump had been briefed on the shooting and was monitoring it.

The Bureau of Alcohol, Tobacco, Firearms and Explosives said it was responding. The New York police department sent emergency services personnel, and the force’s counter-terrorism unit was monitoring the situation.

Video shot by residents recorded loud volleys of gunfire reverberating along one of the city‘s main streets and showed a long line of law enforcement officers pointing guns as they advanced, yelling to bystanders, “Clear the street! Get out of the way!”