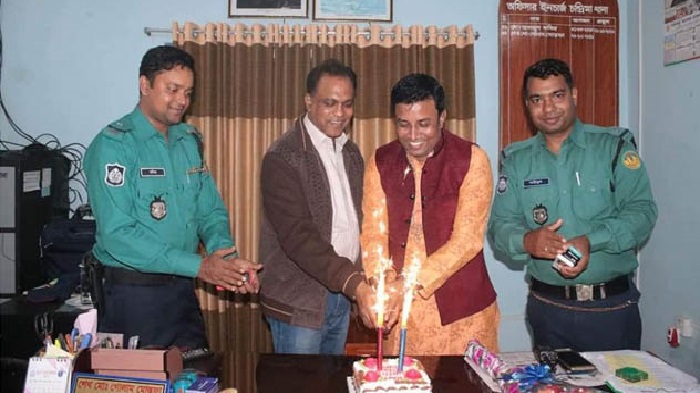 An officer-in-charge (OC) of Rajshahi Metropolitan Police (RMP) allegedly arranged a party at his office room to celebrate the birthday of a ward commissioner of the Rajshahi City Corporation (RCC).

Two photographs of the birthday celebration went viral on the social media platforms sparking criticism among residents of the city as well as the people of the country.

Later, Sumon, who was expelled from Jubo League years ago, himself posted two photos of his birthday celebration on his Facebook page at the same night.

The OC greeted councillor with a bouquet of flowers, when Sumon along with some of his associates paid a visit to the Chandrima Police Station that night.

In a photo, OC Golam Mostofa was seen launching the birthday celebration by lighting candles, while, in another photo, he was spotted offering a slice of cake to Sumon.

Inspector (investigation) of the station Shariful Islam and another police officer were present beside them.

A high official of Rajshahi Metropolitan Police (RMP) said to media, wishing to be unnamed, that “I have also heard the incident. Such an act by the OC is similar to misconduct. We are looking into the incident and will inform the details after the end of the investigation.”

Locals told media that ward councillor Sumon was expelled from Jubo League, the youth wing of the ruling Awami League, for allegedly violating a minor boy years ago.

The organisation took the punitive measure against him after the photo of the scandal went viral on the social media platform at that time.