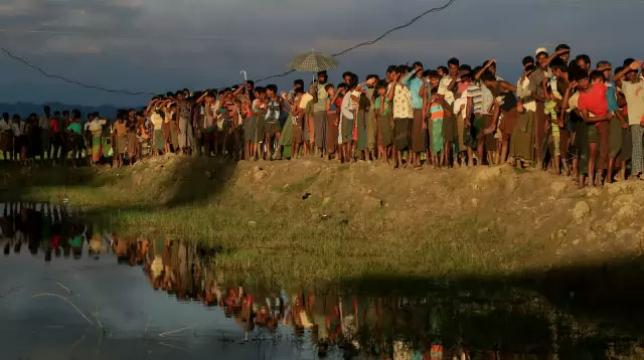 International Court of Justice (ICJ) in The Hague of the Netherlands is set to start three-day hearing on Rohingya genocide today drawing to dock Myanmar leader Aung San Suu Kyi with Gambia being the complainant on behalf of the Organisation of Islamic Cooperation (OIC).

The Gambian and the Myanmar sides would present their second round of oral observations respectively in the morning and in the afternoon on Thursday.

Suu Kyi, who once drew global supports for her fight against injustice in Myanmar and won the Nobel Peace Prize, arrived in the Netherlands on Sunday, to defend her country’s record during three days of hearings.

She would head a team of counsels on Naypyidaw’s behalf while Gambia’s Attorney General and Justice Minister Abubacarr Marie Tambadou would lead a panel of lawyers on the other hand.

A Bangladesh delegation, led by Foreign Secretary M Shahidul Haque, including representatives from civil society also reached The Hague as observers to witness the hearing from the sidelines.

Meanwhile, Canada and the Netherlands have expressed their intention to jointly assist Gambia at ICJ by issuing a joint diplomatic statement on Monday.

In the joint statement both the countries said they will explore all options to support and assist the Gambia in order to uphold international accountability and prevent impunity.

According to international media reports Rohingya surviver groups as well as Myanmar government supporters planned to stage demonstrations in the Dutch city during the hearing.

More than 730,000 Rohingya fled Myanmar in 2017 and took makeshift refuge in neighbouring Bangladesh after a brutal military-led crackdown which the UN earlier called a “textbook example of ethnic cleansing” executed with “genocidal intent” while rights groups dubbed it as genocide.

Naypyidaw, however, denied the allegations saying its military campaign across hundreds of villages in the country’s northern Rakhine state was in response to attacks by Rohingya insurgents.

The West African state said it was acting on behalf of the 57-nation OIC in bringing the case against Myanmar before the ICJ.

A Bangladesh foreign ministry official preferring anonymity toldjournalists  on Monday that the Dhaka delegation would watch and listen to the hearing but make no statement.

He said the Bangladesh delegation, however, would hold meetings with rights groups and other stakeholders.

Bangladesh and Gambia are both OIC member states while all the three countries including Myanmar are signatories to the 1948 Genocide Convention.

The convention prohibits states from committing genocide and simultaneously compels all signatory states to prevent and punish the crime of genocide.

Gambia accused Myanmar of breaching the Convention through a bloody military campaign with an aim to “get Myanmar to account for its action against its own people: the Rohingyas”.

Bangladesh earlier welcomed Gambia for its move on behalf of the OIC with Foreign Minister Dr A K Abdul Momen saying “this is good news that OIC is taking some responsibility”.

Momen also expected the case to mount further pressure on Myanmar to start repatriating and re-integrating their people.

The Gambian move came a month after the head of a UN fact-finding mission on Myanmar warned that “there is a serious risk of genocide recurring” as the mission submitted its final report.

In another development on Nov 14, the International Criminal Court (ICC), based in The Hague as well, authorised its prosecutor office to launch an investigation into the “Situation in Bangladesh/Myanmar”.

According to legal experts and diplomats ICJ is entrusted with the task of settling disputes among countries while ICC could expose persons concerned to punitive actions.

The ICC judges’ authorization came as its prosecution office, in July this year, sought permission to open a formal investigation to expose to justice Myanmar generals and others concerned for committing crimes against humanity as its ICC deputy prosecutor James Stewart visited Bangladesh.

ICC Prosecutor Fatou Bensouda in a statement at that time said the ICC judges feared that Myanmar may have ‘state policy’ to attack its minority Rohingya population in Rakhine.

Bangladesh is hosting over 1.1 million forcefully displaced Rohingyas in Cox’s Bazar district and most of them arrived there since August 25, 2017 after the military crackdown at their homeland.