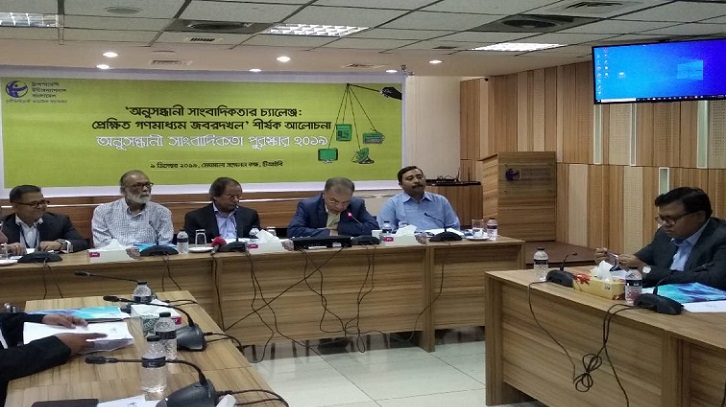 Mentioning that the risk for media in Bangladesh has increased for various reasons, Executive Director of Transparency International Bangladesh (TIB) Dr Iftekharuzzaman on Monday said they will have to survive facing all the odds and obstacles.

He made the remarks while speaking at a function marking the distribution of the TIB Investigative Journalism Awards at its Dhanmondi office.

The TIB chief alleged that a section of media is making compromise to get professional benefits. “We (journalists) have to stand before the mirror. We have to mend ourselves and ensure professionalism. We have no reasons to be frustrated. There’s potential to go forward,” he said.

He also said they want to take forward investigative journalism here and for this reason, they arrange training and give fellowship, too.

Dr Iftekharuzzaman quipped that a political party loves them when they are in opposition. “But when they come to power, they hate us directly. So, we’re in a ‘love-and-hate’ relation.”

He said they have a good relation with media. “We want journalism profession to establish well here. So, TIB has been giving awards since 1999 for investigative journalism.”

Prof Dr Syed Manzoorul Islam of Dhaka University said investigative reporting is an ethical context. “It can break the wall of corruption. So, many threats can come here.”

“TIB also carries investigation like the media. So, it faces the risk of threat, too. However, we could have gone so far had there been transparency in all the fields of Bangladesh,” he said.

He also lamented that teachers are now not in teaching profession but in job. “We’re now doing job. We always look for facilities like secretaries. “For the reason, our education is such a situation.”

Noted journalist and columnist Afsan Chowdhury said not the media owners but journalists of the country are now in a bad position.

Sheikh Manjur-E-Alam said the mainstream media are closing gradually and their activities also are shrinking following various reasons, including advertisement problem. “Around 4,500 journalists lost their job in the last six months,” he said.

Quoting a report of Ain O Salish Kendro, he said 207 journalists were tortured by ruling party men and law enforcement in 2018.

Ten journalists and a television crime programme received the TIB awards for their investigative reports.