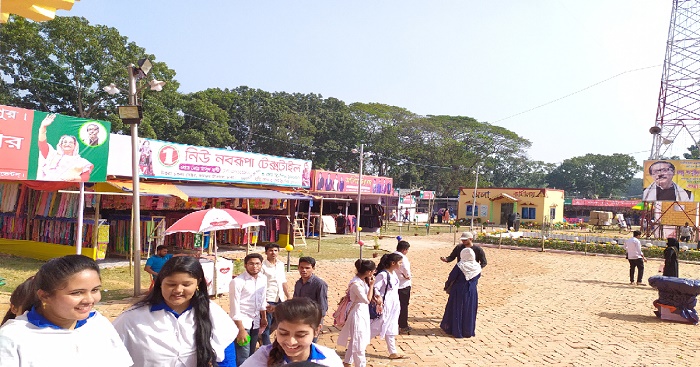 With the slogan, ‘Sonali Anshe Bhorpur, Valobashi Faridpur’ (Full of golden fibre, we love Faridpur’), the district administration has arranged the month-long Faridpur Branding Fair that has nevertheless failed to cover the full range of goods produced in the district.

Faridpur is the largest jute producing district in the country and golden fibre is the brand of the district.

A day before the fair began on November 30, Deputy Commissioner of the district Atul Sarkar said the aim of the fair is to create market for jute and jute products at home and abroad.

However, the fair has so far failed to serve the original purposes as many local products have largely been ignored.

During a visit to the fair recently, this correspondent found that 75 stalls were set up although 120 stalls were supposed to be there.

Jute products are being sold at only one stall set up by the district administration. Besides, three other stalls are only showcasing jute products.

A staggering 22 stalls are for cosmetic products, much to the disappointment of visitors.

Around 11 stalls are of clothes where saris, blazers, Modi Koti, jackets and boutiques have been put on display while 10 others of food.

Besides, there are Muktijoddha Corner, Golden Citizen Corner, stalls of the Department of Women Affairs, Social Welfare Department’s stall and Protik Mohila Samity.

There is a Bangabandhu Corner where books written by and on Father of the Nation Bangabandhu Sheikh Mujibur Rahman have been kept.

Bangladesh Agenda-2030 and Rashin NGO have separate stalls but they have no product to display for the visitors.

Sujan Kumar Paul of the pottery stall of Bangladesh Small and Cottage Industries Corporation (BSCIC) stall said the sale volume is too low.  He said they could only sell products worth Tk 500-Tk 1,000 every day.

Faisal Hasan, a representative of Akbar Shoe Stall, said the fair is yet to gain momentum.

Shipra Goshwami, president of the district chapter of Conscious Citizens’ Committee, said if it is named as the branding fair, the district administration should have emphasised on exhibition and sales of jute products as jute is the district’s brand.

Aslam Mollah, additional deputy commissioner (revenue) and convener of the fair organising committee, admitted that the branding fair should be of jute products. “But we’ve kept a blend of handloom, handicraft and cottage industries as any fair can’t be arranged with only jute.”

About the 22 cosmetics stalls, he said they permitted those as people use cosmetic items in a large scale in the winter.

The ADC said there are 12 running jute mills in the district and all of them were invited to join the fair. “Only three of them are taking part in the fair but they aren’t selling any product.”