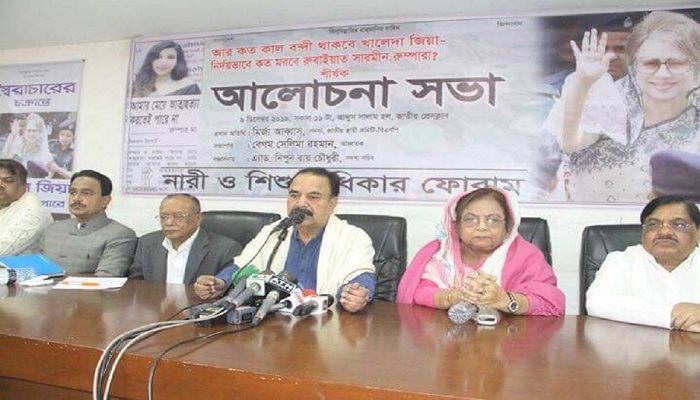 “The current parliament is an illegal outcome of December-29 election. Though we’ve joined it for political and strategic reasons, it’s now the responsibility of our MPs to step down first, and then take part in the oust-government movement,” he said.

The BNP leader came up with the remarks while speaking at a discussion arranged by Nari and Shishu Odhikar Forum at the Jatiya Press Club.

Gayeshwar, a BNP standing committee member, said people do not like BNP’s strategy to wage a movement for the government’s downfall keeping its MPs in parliament. “We need to make it clear to people whether we really want to ensure the government’s fall. Only then, people will stand by us and give us support.”

He also said BNP will not able to wage a strong movement until the party can clearly understand people, its political goal and the way to achieve it.

The BNP leader said people want a change in the government as they have got fed up with its ‘misrule’. “How will you (govt) prevent people from bringing that change? How long will you keep Khaleda Zia in jail? She won’t be there in jail for a long time.”

Gayeshwar said Khaleda Zia’s bail in Zia Charitable graft case now depends on the will of Sheikh Hasina and a country, not on the court, as the judges cannot work independently after the ‘brutal removal’ of former Chief Justice SK Sinha. “The present judges are very careful and they won’t want to face the same fate of SK Sinha.”

He urged the BNP leaders and activists to take to the streets braving imprisonment to have Khaleda Zia freed from jail ousting the current government.

The BNP leader opposed the participation of Indian artists in the inaugural ceremony of BPL in the month of Victory.

The BNP leader said India did not show proper respect to Prime Minister Sheikh Hasina during her recent visit to West Bengal as it does not consider Bangladesh as an independent and sovereign country.

“We think India helped us in 1971, but after 47 years they (India) think they invested in our country at that period. So, they want to take from us… we need to know much we’re indebted to them. If necessary, we’ll repay it by selling the blood of 16 crore people, but we won’t allow this country to remain under anybody’s bondage.”