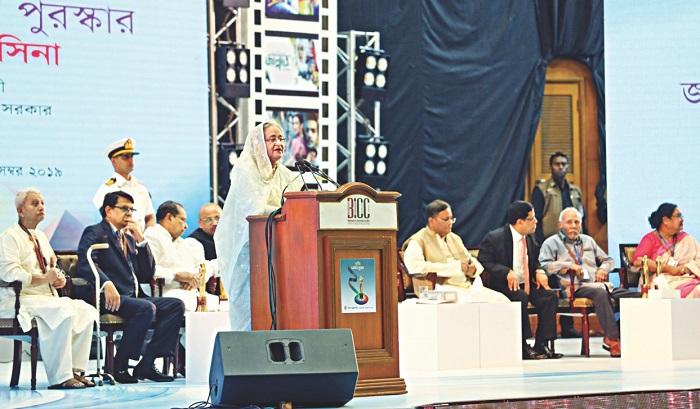 The National Film Awards-2017 and 2018 were distributed among the winners at a gala ceremony at Bangabandhu International Conference Centre (BICC) in the capital on Sunday, reports BSS.

Prime Minister Sheikh Hasina handed over the awards, the highest recognition to the contribution of artistes in Bangladeshi films, as the chief guest.

Earlier on November 7, the names of the recipients of National Film Award 2017 and 2018 were announced in 27 and 28 categories respectively.

Eminent film actor ATM Shamsuzzaman and actress Salma Begum Sujata jointly won the lifetime achievement award of 2017 for their contributions to the film industry while actor, producer and director MA Alamgir and actor Prabir Mitra won the lifetime award for 2018.

Department of Films and Publications (DFP)’s Director General Mohammad Istaque Hossain has received the Best Film Award for the movie ‘Putro’ from Prime Minister Sheikh Hasina at the function.

Badrul Anam Soud has been adjudged the best director for his film “Gohin Baluchar” for 2017 and Mustafizur Rahman Manik won the award for film ‘Jannat’ for 2018.

Ferdous Ahmed and Sadik Md Saiman (Saiman Sadik) have been adjudged for best actor for films ‘Putro’ and ‘Jannat’ respectively for 2018.

The best actress in leading role award 2017 went to Nusrat Imrose Tisha for film ‘Halda’ while Jaya Ahsan won the award for 2018 for her role in film ‘Debi’.

The best actor in supporting role award 2017 went to Md Shahadat Hossain for ‘Gahin Baluchar” while Ali Raz won the award for 2018 for ‘Jannat’.

The best supporting actress award 2017 jointly went to Subarna Mustafa and Runa Khan for their films ‘Gahin Baluchar’ and ‘Halda’ while Sucharita won the award for 2018 for film ‘Meghkonya’.

Zahid Hasan was awarded the best villain in the film “Halda” for 2017 while Sadeq Bachchu won the award for 2018 for film ‘Ektee Cinemar Golpo’.

Mamtaz Begum was adjudged the best female singer for her song “Na Jani Kon Aporadhe” in the film “Satta” for 2017 while the award for 2018 jointly went to Sabina Yasmin for her song “Bhule Man Oviman’ in film ‘Putra’ and Akhi Alamgir for her song ‘Golpo Kothar Oi’ in film ‘Ektee Cinemar Golpo’.

“Galpo Sangkhepe” was awarded the best short film award, and Bangladesh Film and Television Institute got the awarded for 2018.

The best actor (children) for 2018 went to Fahim Muhatasim for the film ‘Puthro’.

In the best makeup man category, Md Javed Mian has been awarded for film ‘Dhaka Attack’ in 2017 and Farhad Reza Milan in 2018.

Besides, Badrul Alam Soud received the best dialogue writer award for film ‘Gahin Baluchar’ in 2017 and SM Harun-or-Rashid for film ‘Putro’ in 2018. Shuvashis Majumder Bappa has been awarded as the best musician for film ‘Satta’ in 2017 while Runa Laila for film ‘Ekti Chinemar Galpo’ in 2018.

Azad Bulbul bagged the best story writer for film ‘Halda’ in 2017 while Sudipto Sayeed Kahn for film ‘Jannat’ in 2018. Sezul Hossain has been awarded as best lyricist for film ‘Satta’ in 2017 and Kabir Bakul and Julfikar Russel for films ‘Nayak’ and ‘Putro’ in 2018.