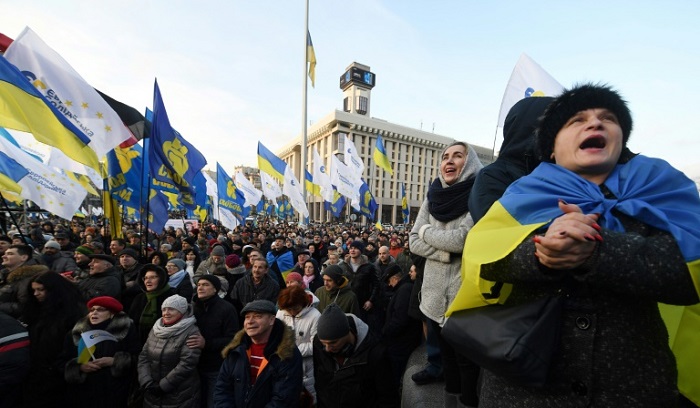 Some 5,000 Ukrainians rallied in Kiev on Sunday warning President Volodymyr Zelensky to resist pressure from Russia's Vladimir Putin when the two men meet on Monday for talks on the conflict in Ukraine's east.

Protesters held placards with slogans such as "No to capitulation", "Stay away from Moscow" and "Russian gas is a noose around our necks" during the rally, led by Zelensky's political opponents.

The two leaders are due to meet for the first time since Zelensky's election in April at the talks in Paris, mediated by French and German leaders Emmanuel Macron and Angela Merkel.

The meeting is aimed at reviving stalled talks on the five-year conflict that has now killed more than 13,000 people. Ukraine and its Western allies accuse Moscow of supporting the separatists militarily, which it denies.

Zelensky's predecessor Petro Poroshenko -- who led Ukraine after Russia's 2014 annexation of Crimea and the breakout of the separatist conflict with backing from Moscow -- was among those who called the protest.

"Our position is very simple... Don't believe Putin after all the bad things he did for Ukraine," Poroshenko told the crowd, adding a second tip for Zelensky: "Don't be afraid of Putin!"

Among those demonstrating were far-right nationalists from the Svoboda party. A similar rally was held in Kiev in November.

"I don't expect anything good from our president because he is really a weak person," 47-year-old farmer Anna Gnylytska, who had travelled to the rally from her home in the Zaporizhia region, told AFP.

"I am afraid the interests of my country will be betrayed."

Another demonstrator, 61-year-old Kiev pensioner Oleksandr Zubchenko, told AFP: "In return for the cheap gas that Russia could offer, Zelensky could make concessions on the issue of the Donbass and its status," referring to the breakaway regions.

Ukraine's new Orthodox Church, which won independence from Moscow under Poroshenko, held prayers on Sunday for "a just peace and Ukraine's victory" at the talks.