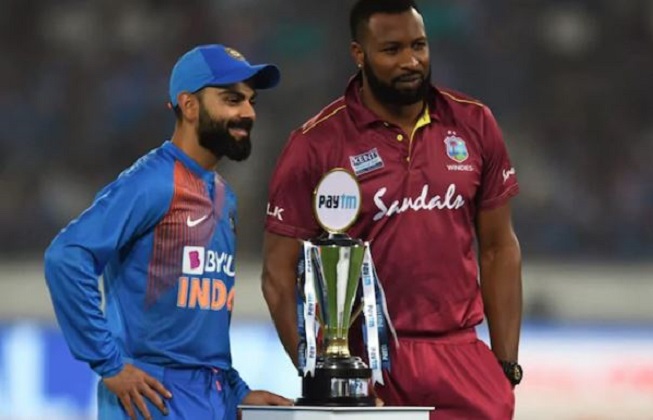 West Indies skipper Kieron Pollard won the toss and elected to bowl first in the second Twenty20 international against India in Thiruvananthapuram on Sunday.

Wicketkeeper-batsman Nicholas Pooran returns to the XI after serving a four-match ban for ball tampering as West Indies' only change from their opening loss of the three-game series.

Pooran, who admitted to "changing the condition of the ball" in a one-day international against Afghanistan in Lucknow last month, comes in for Denesh Ramdin.

"Hopefully we come out and do things right today," Pollard said at the toss.

"We have some plans for the batsmen, we need to keep them from scoring. We need to execute our yorkers, we have been practising."

India, led by Virat Kohli, retain their winning XI as they bid to clinch the series.

"We would have bowled first as well, dew might be a factor. Toss is an uncontrollable," said Kohli, who hit a career-best 94 not out in his team's six-wicket win on Friday.

"It's a nice and hard pitch, much drier. I think it should be a pretty good pitch to bat on during the first half. It's not a worry, we haven't defended too many totals in the past."