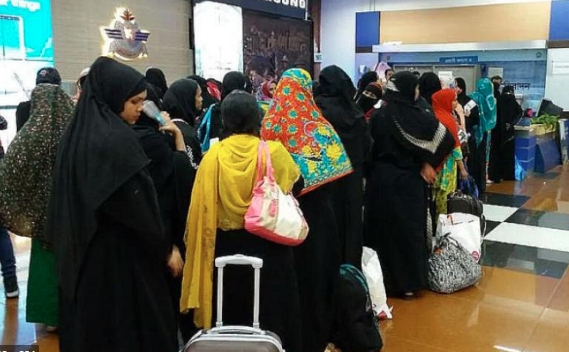 With a dream to have a better life and livelihood, Sara Marak of a remote village in Sunamganj district, has been working in Lebanon as a housemaid for five years.

After passing HSC examination in 2012, she got a job in a NGO, but the salary was not enough for bearing all expenses of her family. Moreover, her husband had not enough income.

“So, I came to Lebanon for three years by expensing Taka 1,60,000. I have already passed five years by renewing my contract for Taka 1,00,000,” Sara Marak, a migrant worker hailed from Zumgaon village under Duwara upazila in Sunamganj told BSS in an interview over mobile phone.

Sara said last year she brought her husband in Lebanon by spending Taka 5,40,000. She informed that her school going son is now studying in class seven and her parents are leading a better life than earlier. “I am earning on an average Taka 50,000 to 60,000 each month which is quite handsome income for my family. Due to working as housemaid, my living cost is not too much.

So, I send money at home every month as per demand of my family. Rest of the money, I keep my hand for future,” she informed with proudly as she is now bearing all expenses of her family.

Like Sara Marak, Sima Areng, also a dweller of Sunamganj district, has changed her fortune by going to Lebanon in 2017.

“I started fight with poverty in 2008 when my husband divorced me. That time, I worked at a factory at Munshiganj district. My salary was only Taka 8,000. This was difficult for me to bear expenses of my sick parents and son,” she said. In 2017, she got an opportunity to go to Lebanon. She went to Lebanon by spending Taka 2,20,000. She also took her sister to Lebanon last year.

Like Sara Marak and Sima Areng, many Bangladesh female are working in many countries, including Saudi Arabia, Lebanon, Qatar and the United Arab Emirates (UAE) and thus they are silently contributing to the country’s economy.

“A huge number of Bangladeshi women are going abroad every year to work as domestic helps despite a growing number of reports of getting abused in adverse working conditions,” she added.

Referring to a study, she informed, male migrants on an average send remittance Taka 1,76,051 annually which is equivalent to around 48 percent of their overall annual income.

On the other hand, female migrants remitted Taka 1,12,475 annually, which accounted for 53.5 percent of their annual income, she added. She said most of the income of female migrant workers comes to the country as they spend a little as living expenditure.

According to the Bureau of Manpower Employment and Training (BMET), a total of 4,70,265 workers, including 78,045 female workers, went abroad from January to September in 2019.