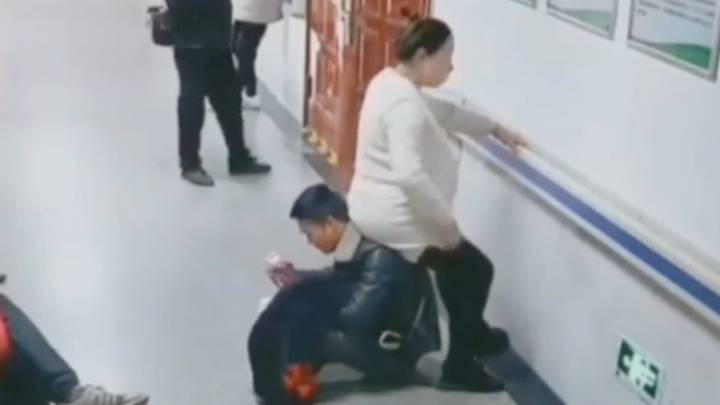 One man in China has gone viral for a selfless act in service of his pregnant partner.

As seen in footage shared by the Hegang police recently, the couple is standing in a crowded hospital corridor, where there are benches full of other waiting patients.

While the couple was waiting to get into their appointment, the woman’s legs reportedly went numb from standing during the long wait. With no seats available on the nearby benches, the man in the video took the situation into his own hands and came up with a creative, if not a bit unorthodox, solution.

The man knelt on the ground to provide support for the woman, who grasped a handrail on the wall as she then lowered herself down onto his back.

But he didn’t stop there.

As his wife sat on his back, he offered her a drink, which she gratefully took and then handed back to him.

As the pair sat in their peculiar position, the other people waiting in the hallway seemed not to even notice — several were staring at cell phones — and a group of other people walked right by without stopping.

It’s not clear exactly how long the couple ended up waiting with the man acting as a makeshift chair.

Police called the man a “good husband,” according to WHDH.