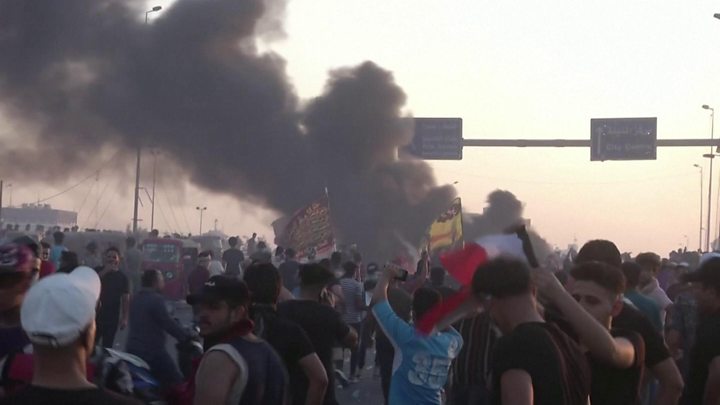 Iraq has seen one of the worst flare-ups in weeks of anti-government protests, with gunmen killing at least 20 people in Baghdad early on Saturday.

The unknown attackers raided key protest sites in the capital sending demonstrators fleeing into the streets.

The unrest in Iraq began in October, fuelled by anger over corruption, unemployment, poor public services and the influence of Iran.

More than 400 people have been killed since the protests started.

Witnesses described chaotic scenes from the latest attacks, which happened overnight on Friday.

Armed men on pick-up trucks are said to have driven through areas that have formed the centre of the protests in Baghdad, forcing demonstrators to flee from bullets.

It is not clear who is responsible - state television called the assailants "unidentified men".

Earlier this week several people were stabbed in Baghdad after supporters of an Iranian-backed militia swarmed into a square occupied by protesters.

In another development, a drone dropped a bomb on the house of the influential Shia cleric Moqtada Sadr, a source within his party said. He was out of the country at the time.

The Iraqi Prime Minister, Adel Abdul Mahdi, has resigned over the protests but those who have taken to the streets want a fundamental overhaul of the country's political system.

Iraq uses a quota-based system that allocates positions to political parties based on sectarian and ethnic identity.

But many Iraqis say it only encourages patronage and corruption and there is particular concern over Iran, the dominant Shia Muslim state which has close links to Iraqi Shia politicians who have been running the country since the toppling of Saddam Hussein.