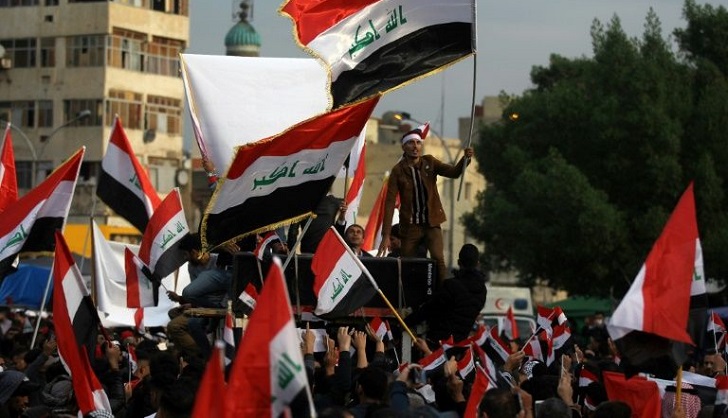 Iraq's anti-regime protesters gathered in the capital and south on Saturday, grieving but defiant after 17 were killed in an attack demonstrators described as "slaughter".

The protest movement faced another worrying turn on Saturday after an armed drone targeted the home of Iraqi cleric Moqtada Sadr, an attack his office said could lead to "civil war."

The dramatic developments have threatened to derail the anti-government rallies rocking Iraq since October, the largest and deadliest grassroots movement in decades.

Late Friday, at least 17 people were killed and dozens wounded when unidentified gunmen attacked a large building where protesters had camped out for weeks, medics said.

"Government forces were one kilometre away and didn't interfere," said a young volunteer medic who had treated wounded people overnight.

The violence pushed the protest toll past 440 dead and nearly 20,000 wounded, according to an AFP tally compiled from medics, police and a national rights commission.

Under stormy skies on Saturday, young men in central Baghdad prayed over an Iraqi flag to mourn those who died the previous night.

They sobbed heavily, their shoulders shaking.

Small clusters of protesters stood near the charred parking complex that was attacked, as larger crowds flocked to nearby Tahrir Square.

"They fired intensely, mercilessly on the protesters," one witness told AFP.

"They wouldn't let us evacuate the wounded. It was slaughter."

After the attack, panicked demonstrators sent out calls through social media for people to join the rallies in Tahrir, hoping to gain strength in numbers.

"I came after the incident and there were tons of people in Tahrir and by Al-Sinek," one demonstrator told AFP.

Many of the new arrivals appeared to be members of Saraya al-Salam (Peace Brigades), which is headed by Sadr.

The notoriously versatile cleric was one of the main sponsors of the current government but then backed the protests.

The cleric sent his followers into the streets after Friday's attack "to protect protesters," a Saraya source told AFP.

They are nicknamed "blue helmets" after their standard headgear, and witnesses said they were visible in large numbers in Tahrir before dawn on Saturday.

But just a few hours later, Sadr's home in the shrine city of Najaf was hit by an apparent mortar round dropped by a drone, sources from his party told AFP.

"Only the external wall was damaged," one of them said, adding that Sadr was currently in Iran.

Dozens of his supporters flocked to his home on Saturday to show support, waving Iraqi flags and the cleric's picture while chanting, "We are all your soldiers!"

"This is a clear attack that could kindle a war -- maybe a civil war -- in Iraq. Self-restraint is essential," Sadr's spokesman Salah al-Obeidi told AFP.

Protesters have long been wary of any partisan support, fearing it could delegitimise their movement or push it towards chaos.

The tensions continued into Saturday, when truckloads of armed men briefly blocked a main road near Tahrir, firing their weapons and shouting, witnesses said.

Army units then deployed on the street.

"We are coming in solidarity with Baghdad," one said.

In Diwaniyah, another protest hotspot, thousands turned out early on Saturday but security forces, too, deployed in larger numbers.

And preparations were under way in Najaf, where most of the country's Shiite Muslims are buried, for the funerals of those killed late Friday.

In the first comment on the incident from a senior official, President Barham Saleh called on authorities to "identify the criminals and bring them to justice".

Diplomats in Baghdad said they were "outraged and deeply saddened at last night's killings" and urged the government hold the perpetrators accountable.

The country has a complex security apparatus including the military, various police forces and the Hashed al-Shaabi, a mostly Shiite network including factions backed by Iran.

The Hashed initially backed Iraq's government against the protests, but switched sides after an intervention by the country's top Shiite cleric, Grand Ayatollah Ali Sistani.

The youth-dominated rallies have brought down the prime minister, Adel Abdel Mahdi, and political blocs have been holding talks this week to agree on a replacement.

Sistani insisted on Friday he was not part of those talks but urged they remain free of "foreign interference," an apparent warning to Iran, Iraq's influential neighbour.

The US on Friday slammed the presence of Tehran's pointman on Iraq, Major General Qasem Soleimani, as "a huge violation of Iraqi sovereignty."

It also slapped sanctions on three Iraqi Hashed leaders it accused of involvement in the deadly crackdown.