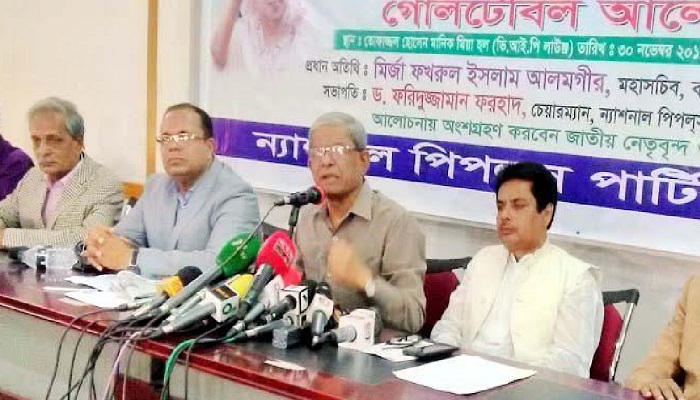 “Now, there’s no rule of law in the country. They (govt) are now staging a nasty drama over the bail of Khaleda Zia, a patriotic and most popular leader. Please free her (Khaleda) on bail and allow her to receive treatment for survival, shunning the drama,” he said.

Or else, the BNP leader warned, people will never forgive this government if anything bad happens to Khaleda. “The people of the country are now concerned about Khaleda Zia’s condition.”

He was speaking at a press conference at the party’s Nayapaltan central office after a joint meeting of BNP and its associate bodies.

On Thursday, the Appellate Division deferred until December 12 the hearing on Khaleda’s bail petition in Zia Charitable Trust graft case.

The court also asked the medical board, formed by the Bangabandhu Sheikh Mujib Medical University (BSMMU) to treat Khaleda Zia, to submit a report on her health condition within December 12.

Fakhrul came down hard on ruling party leaders for criticising pro-BNP lawyers for creating chaos in the courtroom for deferring the hearing on Khaleda’s bail petition, reminding them of November 30, 2006  incident.

“The cabinet members of the usurper government are saying our lawyers committed a grievous crime by standing in favour of our leader (Khaleda) during the hearing on her bail. Try to look back before making such remarks. Our lawyers didn’t do any bad thing. They made their demand for justice sitting in their own places,” he said.

Showing journalists some photos, the BNP leader said the pro-Awami League lawyers took out a procession with sticks in the court on November 30, 2006 and they ransacked the Chief Justice’s chamber.

He said the pro-AL leaders also set fire to the vehicle of then state minister for law Shahjahan Omar that was kept parked on the High Court premises. “Many of those who indulged in such activities were later appointed as judges, but now you’re issuing threats and saying the behaviour of our lawyers is unpardonable. So, it’s necessary to remind you what you did in the Supreme Court in the past.”

About India’s National Registration of Citizens (NRC) issue, Fakhrul said Foreign Minister AK Abdul Momen is saying not to be worried about it as India will not harm its very good friend Bangladesh. “But some people have already come here as they were pushed in.”

He said India’s cabinet recently approved the Citizenship Amendment Bill to give citizenship to non-Muslims like Hindus, Buddhists, Jains, Christians those who are left out of the NRC, but it is not clear where the Muslims will go.

The BNP leader said the government still could not resolve the Rohingya crisis and the problem with India over the sharing of water from common rivers, including that of the Teesta.

He said the government has no success in any area. “They’ve a success in plundering public money and assets. They depleted the country’s resources through plundering.”

Fakhrul also alleged that the ruling party leaders are siphoning off huge money abroad and making their second homes in Canada, Malaysia, the UK and the USA.

He criticised the government also for its failure to control the market of essential items as the prices of onion, rice and oil have continued to rise. “The government has no control anywhere, but they’re making rhetoric about development. There’s a proverb that empty vessels make the most noise.”

The BNP leader called upon the country’s people to get united being imbued with the spirit of the Liberation War in the current victory month to save the country from ‘misrule’ and ‘restore’ democracy.