Hasan for exemplary punishment of those involved in courtroom chaos 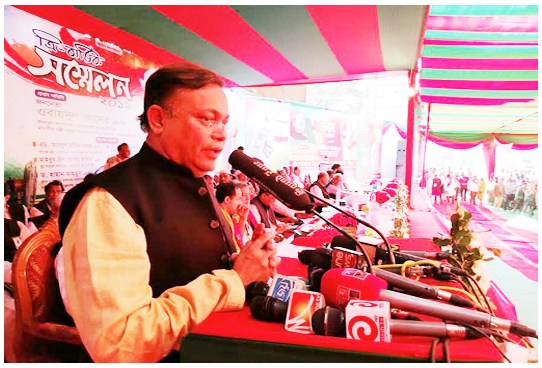 Information Minister Dr Hasan Mahmud said those dishonored the chief justice and other judges in the courtroom should be given exemplary punishment to uphold the dignity of judiciary.

“They (pro-BNP lawyers) extremely dishonored the court and the law, which is an unpardonable offence. Creating chaos in the court is tantamount to contempt of the court and they (BNP) did it in past too,” he said, addressing the first session of Awami League Chattogram North District Unit triennial conference at the historic Laldighi Maiden in the city.

Hasan said the pro-BNP lawyers has set an unprecedented example by creating chaos in the Supreme Court in the presence of the chief justice and six other judges while praying bail for Begum Khaleda Zia.

“If such incident of contempt of court occurs in the apex court during the hearing of BNP chief Begum Khaleda Zia’s bail appeal, then it can be easily assumed the extent of chaos they (BNP) would cause if the bail is granted by the court,” he added.

Terming the behavior of pro-BNP lawyers at a courtroom “an unpardonable offence”, the minister said they turned the courtroom into a battle field and it’s an unforgiveable offence.

The minister said the world leaders including the US president, Indian prime minister, World Bank president and leading economists have praised the unprecedented development of Bangladesh.

“But BNP and their 20-party alliance could not praise the development,” said Hasan, also AL Publicity and Publication Secretary.

He said the country is moving ahead under the dynamic leadership of Father of the Nation Bangabandhu Sheikh Mujibur Rahman’s worthy daughter Prime Minister Sheikh Hasina.

“But, BNP doesn’t like the development. For this, they are talking on unnecessary issues. Now their (BNP) main politics is centered on the knee and waist pain of Begum Khaleda Zia and her cases,” he added.