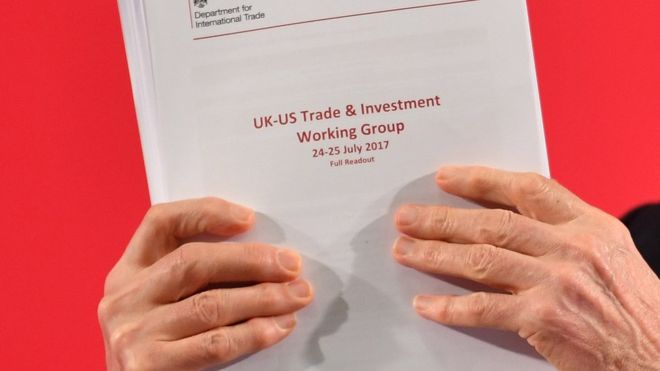 Leaked documents detailing UK-US trade talks were posted on Reddit by an account linked to a campaign "originating from Russia", the online message board has said.

In a post on Friday, the site said it had suspended 61 accounts that were part of a co-ordinated effort.

The papers had their first wide burst of public attention when unveiled in the election campaign by Jeremy Corbyn.

The government said it was "looking into the matter".

Mr Corbyn claimed they show the NHS is "for sale" and Labour says their release was in the public interest.

The Conservative Party, which denies the NHS would be on the table during trade talks with the US, declined to comment on Reddit's announcement.

Reddit's post did not provide any further details about the evidence behind its conclusions.

But it said a group of suspect accounts "provides us with important attribution for the recent posting of the leaked UK documents, as well as insights into how adversaries are adapting their tactics".

Mr Corbyn and Boris Johnson continue to debate what the UK government documents actually mean - and the subject came up again during Friday's televised BBC debate.

The Labour leader, who first highlighted them at a press conference on 27 November, contends they pave the way to higher drug costs and the privatisation of the National Health Service, while the prime minister insists that is not true.

Culture secretary Nicky Morgan said it was "extremely serious" that the leaked documents could be linked to a Russian disinformation campaign.

Speaking to BBC Radio 4's Today programme she said: "I understand from what was being put on that website, those who seem to know about these things say that it seems to have all the hallmarks of some form of interference.

"And if that is the case, that obviously is extremely serious. And actually as culture secretary, obviously one of the things that we are looking for and monitoring is any interference in our elections."