World's most famous conjoined twins on dating, learning to drive and playing 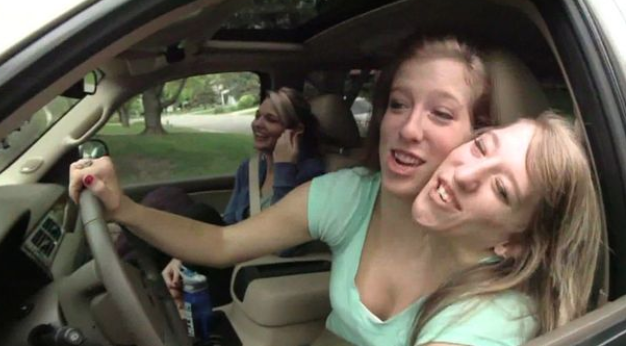 Abby and Brittany Hensel shot to fame aged just six when they appeared on an episode of the Oprah Winfrey Show back in 1996.

The 29-year-old women are fused together at the torso, with each controlling one side of their body.

They learnt to work as one - walking and doing daily tasks that many thought they would never manage.

But the pair have appeared in their own reality show and flourished into aspiring adults, claiming that although they have one body, they have two souls.

Born on March 7, 1990, in Minnesota, USA, their parents Patty and Mike had no idea they were even expecting twins.

Doctors later realised that the twins' heads must have been perfectly aligned during the ultrasounds during Parry's pregnancy to give the appearance of a "normal" fetus developing.

With poor prognosis at the time for conjoined twins, the girls were not expected to survive even the first night.

But they have flourished, even going on to university where they achieved separate degrees.

According to Time magazine the girls were born with five limbs - an extra arm growing between their heads - but this was removed during infancy.

Although they discussed their options parents Patty and Mike never considered separating the girls, fearing that they would die or be left with severe disabilities if it was attempted.

Instead they encouraged the girls to develop their own minds.

Speaking when they were older, Abby said: "We never wish we were separated because we would never be able to do all the things that we do now, like play softball, run and do sports."

On their 16th birthday they passed their driving test - with both of them behind the wheel.

Brittany told the Daily Mail at the time: "Abby does the pedals and the gear shifter.

"I take over the blinkers and the lights. But she likes driving faster than me."

Speaking to the Daily Mirror back in 2012 as their reality show began, the pair hoped it would prove to the world that they are totally different people with unique personalities, who share dreams of marriage and having children of their own.

But they weren't prepared to talk about their love life back then.

Brittany, the joker of the two, said: “The whole world doesn’t need to know who we are seeing, what we are doing and when we are going to do it.

"But believe me, we are totally different people.”

Abby, the feisty stubborn one, added: “Yeah, we are going to be mums one day, but we don’t want to talk about how it’s going to work yet.”

The pair graduated from Bethel University, each with their own degree, as they headed off for a career in teaching.

They are now fifth-grade teachers in the US, but they reportedly only get one salary.

Speaking to the BBC, Abby said: "Obviously right away we understand that we are going to get one salary because we're doing the job of one person.

As maybe experience comes in we'd like to negotiate a little bit, considering we have two degrees and because we are able to give two different perspectives or teach in two different ways."

With Brittany adding: "One can be teaching and one can be monitoring and answering questions.

"So in that sense we can do more than one person."

It is thought there are only 12 adult pairs of conjoined twins in the world, with Abby and Brittany making a success of their lives despite the challenges they face.

Their boss and headteacher of their school Paul Good said: "I don't think there's anything that they won't try or something that they couldn't be able to do if they really wanted to.

"To bring that to children, especially kids who might be struggling, that's very special, that's learnt through lived example."